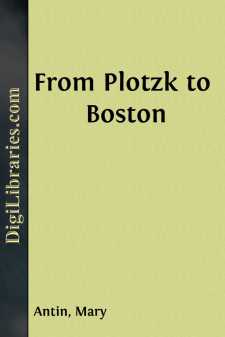 The "infant phenomenon" in literature is rarer than in more physical branches of art, but its productions are not likely to be of value outside the doting domestic circle. Even Pope who "lisped in numbers for the numbers came," did not add to our Anthology from his cradle, though he may therein have acquired his monotonous rocking-metre. Immaturity of mind and experience, so easily disguised on the stage or the music-stool—even by adults—is more obvious in the field of pure intellect. The contribution with which Mary Antin makes her début in letters is, however, saved from the emptiness of embryonic thinking by being a record of a real experience, the greatest of her life; her journey from Poland to Boston. Even so, and remarkable as her description is for a girl of eleven—for it was at this age that she first wrote the thing in Yiddish, though she was thirteen when she translated it into English—it would scarcely be worth publishing merely as a literary curiosity. But it happens to possess an extraneous value. For, despite the great wave of Russian immigration into the United States, and despite the noble spirit in which the Jews of America have grappled with the invasion, we still know too little of the inner feelings of the people themselves, nor do we adequately realize what magic vision of free America lures them on to face the great journey to the other side of the world.

Mary Antin's vivid description of all she and her dear ones went through, enables us to see almost with our own eyes how the invasion of America appears to the impecunious invader. It is thus "a human document" of considerable value, as well as a promissory note of future performance. The quick senses of the child, her keen powers of observation and introspection, her impressionability both to sensations and complex emotions—these are the very things out of which literature is made; the raw stuff of art. Her capacity to handle English—after so short a residence in America—shows that she possesses also the instrument of expression. More fortunate than the poet of the Ghetto, Morris Rosenfeld, she will have at her command the most popular language in the world, and she has already produced in it passages of true literature, especially in her impressionistic rendering of the sea and the bustling phantasmagoria of travel.

What will be her development no one can say precisely, and I would not presume either to predict or to direct it, for "the wind bloweth where it listeth." It will probably take lyrical shape. Like most modern Jewesses who have written, she is, I fear, destined to spiritual suffering: fortunately her work evidences a genial talent for enjoyment and a warm humanity which may serve to counterbalance the curse of reflectiveness. That she is growing, is evident from her own Introduction, written only the other day, with its touches of humor and more complex manipulation of groups of facts. But I have ventured to counsel delay rather than precipitation in production—for she is not yet sixteen—and the completion of her education, physical no less than intellectual; and it is to this purpose that such profits as may accrue from this publication will be devoted. Let us hope this premature recognition of her potentialities will not injure their future flowering, and that her development will add to those spiritual and intellectual forces of which big-hearted American Judaism stands sorely in need. I should explain in conclusion, that I have neither added nor subtracted, even a comma, and that I have no credit in "discovering" Mary Antin. I did but endorse the verdict of that kind and charming Boston household in which I had the pleasure of encountering the gifted Polish girl, and to a member of which this little volume is appropriately dedicated.

In the year 1891, a mighty wave of the emigration movement swept over all parts of Russia, carrying with it a vast number of the Jewish population to the distant shores of the New World—from tyranny to democracy, from darkness to light, from bondage and persecution to freedom, justice and equality. But the great mass knew nothing of these things; they were going to the foreign world in hopes only of earning their bread and worshiping their God in peace....