From Place to Place 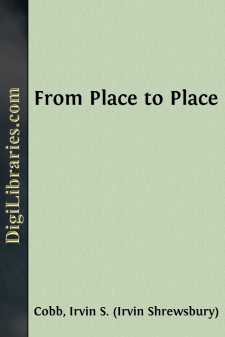 THIS man that I have it in mind to write about was, at the time of which I write, an elderly man, getting well along toward sixty-five. He was tall and slightly stooped, with long arms, and big, gnarled, competent-looking hands, which smelled of yellow laundry soap, and had huge, tarnished nails on the fingers. He had mild, pale eyes, a light blue as to colour, with heavy sacs under them, and whitish whiskers, spindly and thin, like some sort of second-growth, which were so cut as to enclose his lower face in a nappy fringe, extending from ear to ear under his chin. He suffered from a chronic heart affection, and this gave to his skin a pronounced and unhealthy pallor. He was neat and prim in his personal habits, kind to dumb animals, and tolerant of small children. He was inclined to be miserly; certainly in money matters he was most prudent and saving. He had the air about him of being lonely. His name was Tobias Dramm. In the town where he lived he was commonly known as Uncle Tobe Dramm. By profession he was a public hangman. You might call him a gallowsmith. He hanged men for hire.

So far as the available records show, this Tobias Dramm was the only man of his calling on this continent. In himself he constituted a specialty and a monopoly. The fact that he had no competition did not make him careless in the pursuit of his calling. On the contrary, it made him precise and painstaking. As one occupying a unique position, he realized that he had a reputation to sustain, and capably he sustained it. In the Western Hemisphere he was, in the trade he followed, the nearest modern approach to the paid executioners of olden times in France who went, each of them, by the name of the city or province wherein he was stationed, to do torturing and maiming and killing in the gracious name of the king.

A generous government, committed to a belief in the efficacy of capital punishment, paid Tobias Dramm at the rate of seventy-five dollars a head for hanging offenders convicted of the hanging crime, which was murder. He averaged about four hangings every three months or, say, about nine hundred dollars a year—all clear money.

The manner of Mr. Dramm's having entered upon the practise of this somewhat grisly trade makes in itself a little tale. He was a lifelong citizen of the town of Chickaloosa, down in the Southwest, where there stood a State penitentiary, and where, during the period of which I am speaking, the Federal authorities sent for confinement and punishment the criminal sweepings of half a score of States and Territories. This was before the government put up prisons of its own, and while still it parcelled out its human liabilities among State-owned institutions, paying so much apiece for their keep. When the government first began shipping a share of its felons to Chickaloosa, there came along, in one clanking caravan of shackled malefactors, a half-breed, part Mexican and the rest of him Indian, who had robbed a territorial post-office and incidentally murdered the postmaster thereof....