From October to Brest-Litovsk 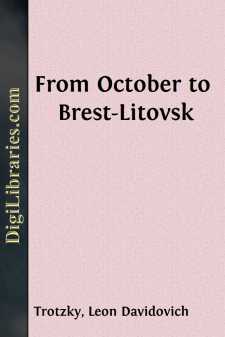 Events move so quickly at this time, that it is hard to set them down from memory even in chronological sequence. Neither newspapers nor documents are at our disposal. And vet the repeated interruptions in the Brest-Litovsk negotiations create a suspense which, under present circumstances, is no longer bearable. I shall endeavor, therefore, to recall the course and the landmarks of the October revolution, reserving the right to complete and correct this exposition subsequently in the light of documents.

But the war produced an altogether different succession of events. The army welded the peasants together, not by a political, but by a military tie. Before the peasant masses could be drawn together by revolutionary demands and ideas, they were already organized in regimental staffs, divisions and army corps. The representatives of petty bourgeois democracy, scattered through this army and playing a leading role in it, both in a military and in a conceptual way, were almost completely permeated with middle-class revolutionary tendencies. The deep social discontent in the masses became more acute and was bound to manifest itself, particularly because of the military shipwreck of Czarism. The proletariat, as represented in its advanced ranks, began, as soon as the revolution developed, to revive the 1905 tradition and called upon the masses of the people to organize in the form of representative bodies—soviets, consisting of deputies. The army was called upon to send its representatives to the revolutionary organizations before its political conscience caught up in any way with the rapid course of the revolution. Whom could the soldiers send as deputies? Eventually, those representatives of the intellectuals and semi-intellectuals who chanced to be among them and who possessed the least bit of knowledge of political affairs and could make this knowledge articulate. In this way, the petty bourgeois intellectuals were at once and of necessity raised to great prominence in the awakening army. Doctors, engineers, lawyers, journalists and volunteers, who under pre-bellum conditions led a rather retired life and made no claim to any importance, suddenly found themselves representative of whole corps and armies and felt that they were "leaders" of the revolution....