From Lower Deck to Pulpit 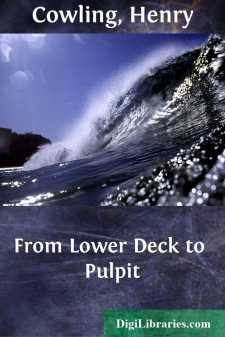 Kingsand, though but a village in size, has a history of its own. Situated about five miles from Plymouth, on the Cornish coast, and being a fishing port, the inhabitants are on intimate terms with the sea. In the summer months one may observe many an indication of this relationship or intimacy'. Youngsters run about the beach and the village barefooted, most of them wearing the orthodox blue jersey, whilst young women, and even older ones, love to sit on the rocks near the sea and work away with their sewing or knitting, and, I must not forget to add, with their tongues also. Strange and startling are the stories one may hear which have been handed down from one generation to another concerning the smuggling days of long, long ago—and yet not so long ago, for even at this time of day my mother often narrates hair breadth escapes of smugglers which happened in her girlhood. In this village I was born on the 9th of April 1874. In visiting Kingsand from time to time, I have often stood and gazed at the old house in which I was born—not that any recollections in connection with it survive in my memory, for when I was only five weeks old, my father, who was in the navy, received an appointment as a gunnery instructor in the Royal Naval Reserve battery in the far north.

Sometimes my mother indulges in a retrospect, and I love to hear her tell of that May morning when, she bade 'farewell' to her loved ones and dear old Kingsand, and how, wrapping me in a large shawl, she proceeded to Cremyll, a distance of three miles, from whence we were transported across the harbour to Plymouth in the ferry boat. Then came the long and tedious journey to Maryport. Sweet mother! how pathetic to me it all now seems.

We resided at Maryport two years, during which time my eldest sister was born. Often would my mother carry me into the battery, and at the sight of the large guns, and the queer looking helmets hanging on the walls, my little smile would be converted into vehement crying. How little I dreamed then of my familiarity with them in after years! But I must not anticipate.

After completing our stay here, my parents returned to Kingsand, but only for a brief period. It was at, this period that I met with my first accident. Crawling away from the front door I made all possible speed to a large tank of water close by. In looking upon it from an elevated bank of ground, I overbalanced myself and fell headlong into it. When rescued, my nose was bleeding profusely. It was a lesson to me, for during the few subsequent weeks we remained in Kingsand I remembered my 'dive,' and gave the tank a wide margin.

We soon removed to Millbrook, a large village situated a mile and a half from Kingsand. In those days the quay at Millbrook was picturesque with groups of watermen who gained an honest livelihood by ferrying passengers to Devonport and back. But former things have passed away; and now two sets of steamers, well adapted for shallow water (for the landing-piers at Millbrook are governed by the ebb, and flood tide), have almost entirely dispensed with passenger-boats, and the trip from Millbrook to Devonport, or vice versa, costs the modest sum of one penny....