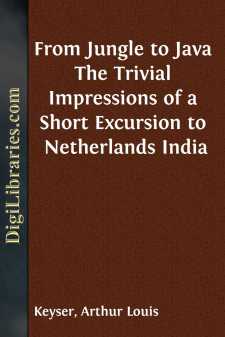 Mr. X., whose impressions and mild adventures I have undertaken the task of editing, has asked me to narrow his personal introduction to such limits as is consistent with the courtesy due to my readers, if haply I find any. He prefers, as his pseudonym implies, to remain an unknown quantity. I need only explain that he is an officer employed in one of the small States of the Malay Peninsula, which are (very much) under the protection of the Colonial Government of the Straits Settlements. The latter, with careful forethought for their ease-loving rulers, appoints officers to relieve them of all the cares and duties of administration, and absolves them from the responsibility of a Government somewhat more progressive in its policy than might commend itself to Oriental ideas, if left without such outside assistance.

As the title intimates, Mr. X.'s duties compel him to make his home in the jungle. The word has many significations in the East, where it is often used to express a region remote from civilization, although perhaps consisting of barren mountains or treeless plains. Mr. X.'s jungle, however, is one realizing what it represents to the untravelled Englishman. It is a land of hill and dale covered with thickly growing forest trees, with here and there by the side of the rivers, which are Nature's thoroughfares, or the main roads made by man, small oases of cultivation. It is a beautiful country, with a climate which those who live in it—and they are the best witnesses—declare to be healthy and agreeable. And the members of the small community who form the European population take a personal pride in the amenities of their beautiful retreat, with its perennial verdure, and glory in their "splendid isolation." Criticisms are resented, and suggestions of indisposition due to climatic influence held to be little short of traitorous. So, as may be imagined, it was a matter of no ordinary interest when X. not only complained of being unwell, but also developed signs of a chronic discontent. For X.—no Mr. was necessary in that little round-table club—certainly was unwell. Of this there could be no doubt, and such a condition of body was little short of an abuse of the privileges of the place. But since he could give no real explanation of his feelings, and only sighed vaguely when engaged in the daily preprandial game of billiards at the club, it was thought best to ignore his new departure, and to leave the subject severely alone.

However, the effect of this wise treatment was entirely ruined by the arrival of the doctor, who bore the sounding official designation of the Residency surgeon. This gentleman was wont to be sceptical in the matter of ailments, limiting his recognition only to honest, downright illness worthy of the attention of a medico whose name stood in front of a formidable array of honourable letters, too numerous for him to mention. But even really great people are not always strictly consistent, and occasionally make small lapses from the straight path of precedent—and so this man of science deigned to cast an eye of interest upon the ailment of X....