From Farm to Fortune or Nat Nason's Strange Experience 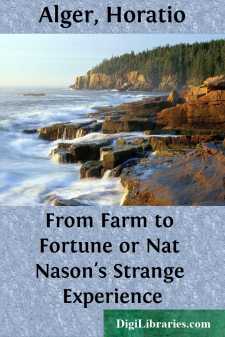 NAT ON THE FARM

"Nat, where have you been?"

"Been fishing," answered the boy addressed, a sturdy youth of sixteen, with clear blue eyes and sandy hair.

"Fishin'? And who said you could go fishin'?" demanded Abner Balberry, in his high, nervous voice.

"Nobody said I could go," answered the boy, firmly. "But I thought you'd all like to have some fish for supper, so I went."

"Humph! I suppose you thought as how them taters would hoe themselves, eh?" sneered Abner Balberry, who was not only Nat's uncle, but also his guardian.

"I hoed the potatoes," was the boy's answer. "Got through at half-past two o'clock."

"If you got through so soon you didn't half do the job," grumbled the man. "I ain't goin' to have you wastin' your time on no fishin', understand?"

"Not when there is work to do on this farm."

"An' I say it couldn't have been done right if ye didn't take proper time fer it, Nat Nason! I know you! You are gittin' lazy!"

"I'm not lazy!" cried the boy, indignantly. "I work as hard as anybody around here."

"Don't you talk back to me!" ejaculated Abner Balberry. "I say you are lazy, an' I know. How many fish did ye catch?"

"I only got two. They didn't bite very well to-day."

"Humph! A-wastin' three hours an' more jest to catch two little fish! If I let you go your own way, Nat Nason, you'll be in the poorhouse before you die."

"I don't think I'll ever get to the poorhouse, Uncle Abner."

"Oh, don't talk back! Take your fish to the kitchen an' then git down to the barnyard as quick as you can. You've got to help me milk to-night. An' don't you dare to go fishin' ag'in, unless I give ye permission," added Abner Balberry, as he strode off towards the barn.

A sharp answer arose to Nat Nason's lips, but he checked it and turned toward the kitchen of the farmhouse.

"What luck did you have, Nat?" questioned the did woman who was Abner Balberry's housekeeper.

"What was Mr. Balberry saying to you?" went on Mrs. Felton, who had been housekeeper at the place since the death of Mrs. Balberry, two years before.

"He was mad because I went fishing."

"Uncle Abner never wants me to have any sport."

"He's a hard-working man, and always was, Nat. He doesn't believe in wasting time."

"But a fellow ought to have a little time off."

"Don't you think I work pretty hard for a boy of my age?"

"Uncle Abner wants to make a regular slave out of a fellow."

"Didn't he say you were to help him milk to-night?"

"Yes, and I might as well get at it right away. If I don't, he'll give me another jawing," answered the boy, and placing his fish on a bench, he strode off toward the barnyard.

Nat Nason was an orphan, the only child of Mr. William Nason, who had been a brother to the late Mrs. Balberry. The boy's father had been killed in a runaway and his mother had never gotten over the shock of the sudden death.

When the youth found himself an orphan he was taken in by his Aunt Mary, who did what she could for him....