From Death into Life or, twenty years of my minstry 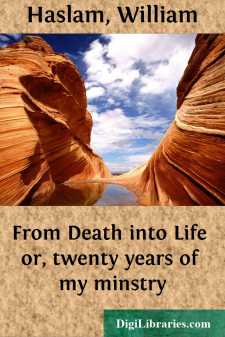 At the time in which this history begins, I had, in the providence of God, a very happy nest; and as far as temporal prospects were concerned, I was provided for to my liking, and, though not rich, was content. I had taken my degree; was about to be ordained; and, what is more, was engaged to be married; in order, as I thought, to settle down as an efficient country parson.

With this bright future before me, I went on very happily; when, one evening, after a hard and tiring day, just as I was sitting down to rest, a letter was put into my hand which had been following me for several days. "Most urgent" was written on the outside. It told me of the alarming illness of the lady to whom I was engaged, and went on to say that if I wished to see her alive I must set off with all haste. It took me a very short time to pack my bag and get my travelling coats and rugs together, so that I was all ready to start by the night mail. At eight o'clock punctually I left London for the journey of two hundred and eighty miles. All that night I sat outside the coach; all the next day; and part of the following night. I shall never forget the misery of mind and body that I experienced, for I was tired before starting; and the fatigue of sitting up all night, together with the intense cold of the small hours of the morning, were almost beyond endurance. With the morning, however, came a warm and bright sunshine, which in some degree helped to cheer me; but my bodily suffering was so great that I could never have held up had it not been for the mental eagerness with which I longed to get forward. It was quite consonant with my feelings when the horses were put into full gallop, especially when they were tearing down one hill to get an impetus to mount another.

At length, the long, long journey was over; and about thirty hours after starting, I found myself staggering along to the well-known house. As I approached the door was softly opened by a relative who for several days had been anxiously watching my arrival. She at once conducted me upstairs, to what I expected was a sick chamber, when, to my horror, the first thing I saw was the lid of a coffin standing up against the wall, and in the middle of the room was the coffin, with candles burning on either side.

I nearly fell to the ground with this tremendous shock and surprise. There was the dear face, but it seemed absorbed in itself, and to have lost all regard for me. It no longer turned to welcome me, nor was the hand stretched out, as theretofore, to meet mine. All was still; there was no smile—no voice—no welcome-nothing but the silence of death to greet me.

The sight of that coffin, with its quiet inmate, did not awaken sorrowso much as surprise; and with that, something like anger and rebellion.I was weak and exhausted in body, but strong in wilful insubordination.Murmuring and complaining, I spoke unadvisedly with my lips.

A gentle voice upbraided me, adding, that I had far better kneel down in submission to God, and say "Thy will be done!" This, however, was not so easy, for the demon of rebellion had seized me, and kept me for three hours in a tempest of anger, filling my mind with hard thoughts against God....