From Canal Boy to President Or the Boyhood and Manhood of James A. Garfield 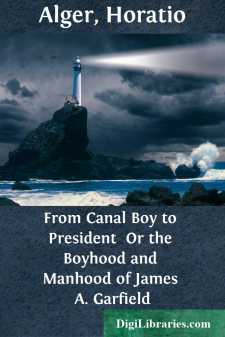 From a small and rudely-built log-cabin a sturdy boy of four years issued, and looked earnestly across the clearing to the pathway that led through the surrounding forest. His bare feet pressed the soft grass, which spread like a carpet before the door.

"What are you looking for, Jimmy?" asked his mother from within the humble dwelling.

"It's hardly time for him yet. He won't be through work till after sunset."

"Then I wish the sun would set quick," said Jimmy.

"That is something we can not hasten, my son. God makes the sun to rise and to set in its due season."

This idea was probably too advanced for Jimmy's comprehension, for he was but four years of age, and the youngest of a family of four children. His father had died two years before, leaving a young widow, and four children, the eldest but nine, in sore straits. A long and severe winter lay before the little family, and they had but little corn garnered to carry them through till the next harvest. But the young widow was a brave woman and a devoted mother.

"God will provide for us," she said, but sometimes it seemed a mystery how that provision was to come. More than once, when the corn was low in the bin, she went to bed without her own supper, that her four children, who were blessed with hearty appetites, might be satisfied. But when twelve months had gone by, and the new harvest came in, the fields which she and her oldest boy had planted yielded enough to place them beyond the fear of want. God did help them, but it was because they helped themselves.

But beyond the barest necessaries the little family neither expected nor obtained much. Clothing cost money, and there was very little money in the log-cabin, or indeed in the whole settlement, if settlement it can be called. There was no house within a mile, and the village a mile and a half away contained only a school-house, a grist-mill, and a little log store and dwelling.

Two weeks before my story opens, a farmer living not far away called at the log-cabin. Thomas, the oldest boy, was at work in a field near the house.

"Do you want to see mother?" he asked.

"All right, sir! Here I am," said Thomas, smiling pleasantly.

"How old are you?" asked the farmer.

The farmer surveyed approvingly the sturdy frame, broad shoulders, and muscular arms of the boy, and said, after a pause, "You look pretty strong of your age."

"And you are used to farm work?"

"Yes, sir. I do about all the outdoor work at home, being the only boy. Of course, there is Jimmy, but he is only four, and that's too young to work on the farm."

"What does he want?" thought Thomas.

"I need help on my farm, and I guess you will suit me," said Mr. Conrad, though that was not his name. In fact, I don't know his name, but that will do as well as any other.

"I don't know whether mother can spare me, but I can ask her," said Thomas....