Friendly Visiting among the Poor A Handbook for Charity Workers 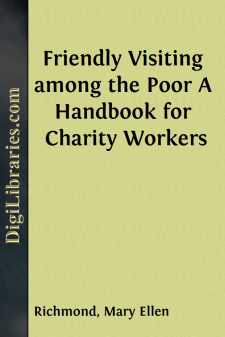 This little volume is intended as a handbook for those who are beginning to do charitable work in the homes of the poor, whether as individuals or as representatives of some church, or of some religious society, such as the King's Daughters, the Epworth League, or the Christian Endeavor Society. The term "friendly visitor" does not apply to one who aimlessly visits the poor for a little while, without making any effort to improve their condition permanently or to be a real friend to them. Friendly visiting, as distinguished from district visiting, originated with the charity organization societies, some of which are indefatigable in training volunteers to do effective work in the homes of the poor. Though I should be glad to find that my book was of some service to these societies, it was not prepared for their use alone, and no {vi} mention is made, therefore, of the organization of visitors into district conferences. For inexperienced workers, who need leadership in their charity, there can be no better training than the meetings of a well-organized conference under a capable chairman, and even the most experienced, by keeping in close touch with such a conference, can do more effective work.

The suggestions herein contained are not to be taken as all applicable to the work of any one visitor. Friendly visitors that tried to adopt them all would have to abandon their other interests, and their other interests make them more useful friends to the poor. Like the words in a dictionary, some suggestions will be of service to a few workers, and others will be found applicable to the work of many.

In addition to the standard authorities mentioned under General References, a list for supplementary reading will be found at the end of each chapter. These lists are in no sense a bibliography of the subject. A handbook such as this is chiefly useful in suggesting further inquiry, and, for beginners, I have thought best to include a number of references out of the {vii} beaten track to stories and magazine articles that seemed illustrative of the matter in hand.

It will be seen that I have borrowed much in direct quotation in the following pages from those who have preceded me in writing about the poor, but my debt does not end here. Whatever I may be said to know about charitable work—my whole point of view and inspiration in fact—can be traced to certain definite sources. To some of the leaders of the Charity Organization Society of London, to Miss Octavia Hill, Mrs. Bernard Bosanquet, and Mr. C. S. Loch, it will be evident to my readers that my obligation is great. It will be evident also that I have been helped by Mrs. Josephine Shaw Lowell and other workers in New York, who, against such odds, are making advances in the reform of municipal abuses; and by that group too who, under the leadership of Miss Jane Addams, have given us, at Hull House in Chicago, so admirable an object lesson in the power of neighborliness. But more than to any other teachers, perhaps, I am indebted to those members of the Associated Charities who organized Boston's friendly visitors nineteen years ago, and have {viii} led them since to increasing usefulness....