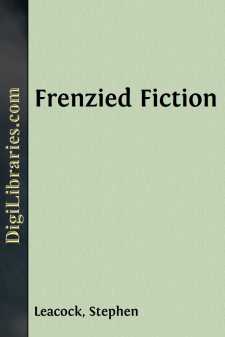 I. My Revelations as a Spy

In many people the very name "Spy" excites a shudder of apprehension; we Spies, in fact, get quite used to being shuddered at. None of us Spies mind it at all. Whenever I enter a hotel and register myself as a Spy I am quite accustomed to see a thrill of fear run round the clerks, or clerk, behind the desk.

Us Spies or We Spies—for we call ourselves both—are thus a race apart. None know us. All fear us. Where do we live? Nowhere. Where are we? Everywhere. Frequently we don't know ourselves where we are. The secret orders that we receive come from so high up that it is often forbidden to us even to ask where we are. A friend of mine, or at least a Fellow Spy—us Spies have no friends—one of the most brilliant men in the Hungarian Secret Service, once spent a month in New York under the impression that he was in Winnipeg. If this happened to the most brilliant, think of the others.

All, I say, fear us. Because they know and have reason to know our power. Hence, in spite of the prejudice against us, we are able to move everywhere, to lodge in the best hotels, and enter any society that we wish to penetrate.

Let me relate an incident to illustrate this: a month ago I entered one of the largest of the New York hotels which I will merely call the B. hotel without naming it: to do so might blast it. We Spies, in fact, never name a hotel. At the most we indicate it by a number known only to ourselves, such as 1, 2, or 3.

On my presenting myself at the desk the clerk informed me that he had no room vacant. I knew this of course to be a mere subterfuge; whether or not he suspected that I was a Spy I cannot say. I was muffled up, to avoid recognition, in a long overcoat with the collar turned up and reaching well above my ears, while the black beard and the moustache, that I had slipped on in entering the hotel, concealed my face. "Let me speak a moment to the manager," I said. When he came I beckoned him aside and taking his ear in my hand I breathed two words into it. "Good heavens!" he gasped, while his face turned as pale as ashes. "Is it enough?" I asked. "Can I have a room, or must I breathe again?" "No, no," said the manager, still trembling. Then, turning to the clerk: "Give this gentleman a room," he said, "and give him a bath."

What these two words are that will get a room in New York at once I must not divulge. Even now, when the veil of secrecy is being lifted, the international interests involved are too complicated to permit it. Suffice it to say that if these two had failed I know a couple of others still better.

I narrate this incident, otherwise trivial, as indicating the astounding ramifications and the ubiquity of the international spy system. A similar illustration occurs to me as I write. I was walking the other day with another man, on upper B. way between the T. Building and the W. Garden.

"Do you see that man over there?" I said, pointing from the side of the street on which we were walking on the sidewalk to the other side opposite to the side that we were on....