French and English A Story of the Struggle in America 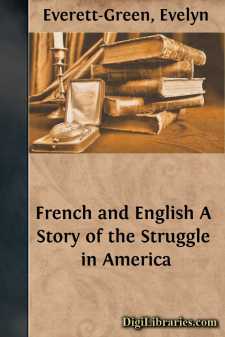 Humphrey Angell came swinging along through the silent aisles of the vast primeval forest, his gun in the hollow of his arm, a heavy bag of venison meat hanging from his shoulders.

A strange, wild figure, in the midst of a strange, wild scene: his clothes, originally of some homespun cloth, now patched so freely with dressed deerskin as to leave little of the original material; moccasins on his feet, a beaver cap upon his head, his leather belt stuck round with hunting knives, and the pistol to be used at close quarters should any emergency arise.

He was a stalwart fellow, as these sons of the forest had need to be--standing over six feet, and with a muscular development to match his stately height. His tawny hair had been darkened by exposure to hot suns, and his handsome face was deeply imbrowned from the influences of weather in all seasons. His blue eyes had that direct yet far-away look which comes to men who live face to face with nature, and learn to know her in all her moods, and to study her caprices in the earning of their daily bread.

Humphrey Angell was not more than twenty years of age, and he had lived ten years in the forest. He had come there as a child with his father, who had emigrated in his young life from England to the settlement of Pennsylvania, and had afterwards become one of the scattered settlers on the debatable ground between the French and English borders, establishing himself in the heart of the boundless forest, and setting to work with the utmost zeal and industry to gather round himself a little farmstead where he could pass his own later years in peace, and leave it for an inheritance to his two sons.

Humphrey could remember Pennsylvania a little, although the life in the small democratic township seemed now like a dream to him. All his interests centred in the free forest, where he had grown to manhood. Now and again a longing would come upon him to see something of the great, tumultuous, seething world of whose existence he was dimly aware. There were times in the long winter evenings when he and his brother, the old father, and the brother's wife would sit round the stove after the children had been put to bed, talking of the past and the future. Then old Angell would tell his sons of the life he had once led in far-away England, before the spirit of adventure drove him forth to seek his fortune in the New World; and at such times Humphrey would listen with eager attention, feeling the stirrings of a like spirit within him, and wondering whether the vast walls of the giant forest would for ever shut him in, or whether it would be his lot some day to cross the heaving, mysterious, ever-moving ocean of which his father often spoke, and visit the country of which he was still proud to call himself a son.

Yet he loved his forest home and the free, wild life he led. Nor was the element of peril lacking to the daily lot--peril which had not found them yet, but which might spring upon them unawares at any moment. For after years of peace and apparent goodwill on the part of the Indians of the Five Nations, as this tract of debatable land had come to be called, a spirit of ill will and ferocity was arising again; and settlers who had for years lived in peace and quietness in their lonely homes had been swooped down upon, scalped, their houses burnt, their wives and children tomahawked--the raid being so swift and sudden that defence and resistance had alike been futile....