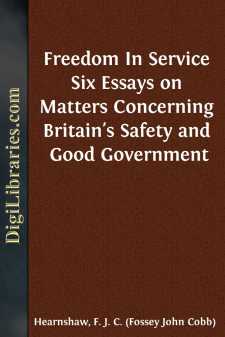 FREEDOM IN SERVICE I THE ANCIENT DEFENCE OF ENGLAND

[Reprinted, with the addition of References, from the Morning Post of August 20th, 1915.]

I. UNIVERSAL OBLIGATION TO SERVE

"The military system of the Anglo-Saxons is based upon universal service, under which is to be understood the duty of every freeman to respond in person to the summons to arms, to equip himself at his own expense, and to support himself at his own charge during the campaign."

With these words Gneist, the German historian of the English Constitution, begins his account of the early military system of our ancestors. He is, of course, merely stating a matter of common knowledge to all students of Teutonic institutions. What he says of the Anglo-Saxon is equally true of the Franks, the Lombards, the Visigoths, and other kindred peoples. But it is a matter of such fundamental importance that I will venture, even at the risk of tedious repetition, to give three parallel quotations from English authorities. Grose, in his Military Antiquities, says: "By the Saxon laws every freeman of an age capable of bearing arms, and not incapacitated by any bodily infirmity, was in case of a foreign invasion, internal insurrection, or other emergency obliged to join the army." Freeman, in his Norman Conquest, speaks of "the right and duty of every free Englishman to be ready for the defence of the Commonwealth with arms befitting his own degree in the Commonwealth." Finally, Stubbs, in his Constitutional History, clearly states the case in the words: "The host was originally the people in arms, the whole free population, whether landowners or dependents, their sons, servants, and tenants. Military service was a personal obligation ... the obligation of freedom"; and again: "Every man who was in the King's peace was liable to be summoned to the host at the King's call."

There is no ambiguity or uncertainty about these pronouncements. The Old English "fyrd," or militia, was the nation in arms. The obligation to serve was a personal one. It had no relation to the possession of land; in fact it dated back to an age in which the folk was still migratory and without a fixed territory at all. It was incumbent upon all able-bodied males between the ages of sixteen and sixty. Failure to obey the summons was punished by a heavy fine known as "fyrdwite."

There is another point of prime significance. Universal service was, it is true, an obligation. But it was more: it was the mark of freedom. Not to be summoned stamped a man as a slave, a serf, or an alien. The famous "Assize of Arms" ends with the words: "Et praecepit rex quod nullus reciperetur ad sacramentum armorum nisi liber homo." A summons was a right quite as much as a duty. The English were a brave and martial race, proud of their ancestral liberty. Not to be called to defend it when it was endangered, not to be allowed to carry arms to maintain the integrity of the fatherland, was a degradation which branded a man as unfree.

This chapter has been issued as a pamphlet by the National Service League, 72, Victoria Street, S.W....