Frederick Chopin, as a Man and Musician - Complete 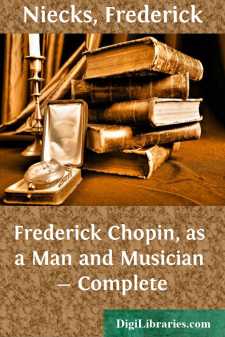 VOLUME I. PREFACE TO THE FIRST EDITION

While the novelist has absolute freedom to follow his artistic instinct and intelligence, the biographer is fettered by the subject-matter with which he proposes to deal. The former may hopefully pursue an ideal, the latter must rest satisfied with a compromise between the desirable and the necessary. No doubt, it is possible to thoroughly digest all the requisite material, and then present it in a perfect, beautiful form. But this can only be done at a terrible loss, at a sacrifice of truth and trustworthiness. My guiding principle has been to place before the reader the facts collected by me as well as the conclusions at which I arrived. This will enable him to see the subject in all its bearings, with all its pros and cons, and to draw his own conclusions, should mine not obtain his approval. Unless an author proceeds in this way, the reader never knows how far he may trust him, how far the evidence justifies his judgment. For—not to speak of cheats and fools—the best informed are apt to make assertions unsupported or insufficiently supported by facts, and the wisest cannot help seeing things through the coloured spectacles of their individuality. The foregoing remarks are intended to explain my method, not to excuse carelessness of literary workmanship. Whatever the defects of the present volumes may be—and, no doubt, they are both great and many—I have laboured to the full extent of my humble abilities to group and present my material perspicuously, and to avoid diffuseness and rhapsody, those besetting sins of writers on music.

The first work of some length having Chopin for its subject was Liszt's "Frederic Chopin," which, after appearing in 1851 in the Paris journal "La France musicale," came out in book-form, still in French, in 1852 (Leipzig: Breitkopf and Hartel.—Translated into English by M. W. Cook, and published by William Reeves, London, 1877). George Sand describes it as "un peu exuberant de style, mais rempli de bonnes choses et de tres-belles pages." These words, however, do in no way justice to the book: for, on the one hand, the style is excessively, and not merely a little, exuberant; and, on the other hand, the "good things" and "beautiful pages" amount to a psychological study of Chopin, and an aesthetical study of his works, which it is impossible to over-estimate. Still, the book is no biography. It records few dates and events, and these few are for the most part incorrect. When, in 1878, the second edition of F. Chopin was passing through the press, Liszt remarked to me:—

"I have been told that there are wrong dates and other mistakes in my book, and that the dates and facts are correctly given in Karasowski's biography of Chopin [which had in the meantime been published]. But, though I often thought of reading it, I have not yet done so. I got my information from Paris friends on whom I believed I might depend. The Princess Wittgenstein [who then lived in Rome, but in 1850 at Weimar, and is said to have had a share in the production of the book] wished me to make some alterations in the new edition....