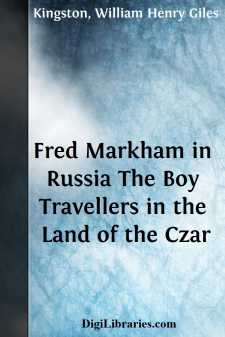 “Thank you, thank you; it will be very delightful,” said Fred Markham.

“It will be jolly, that it will!” exclaimed his younger brother Harry; and home they ran as fast as their legs could carry them to find their father and mother.

“Oh, father, father!—mother, mother!—may we go? May we go?” they exclaimed in a breath together. “Cousin Giles has asked us, and he says that he will take very good care of us, and that he is not joking; that he is in real earnest, and that, if you will give us leave to go, he wishes to set off immediately.”

“But you have not told us where you wish to go to,” said Captain Markham. “If it should chance to be to Timbuctoo, to the Sandwich Islands, or to the antipodes, I fear that I must refuse your request.”

“Even should Cousin Giles be answerable for your safe return, I could not part with you for so long a time as would be required to go to either of those regions of the world,” added their mother, smiling.

“But it is not to Timbuctoo, nor to the Sandwich Islands, nor to any place near so far off that Cousin Giles wants to take us,” replied Fred eagerly. “It is only to Russia, and that is no distance at all, he says.”

“Only to Russia!” exclaimed Captain Markham, with an emphasis on the only. “That country used to be thought a long way off from England in my younger days; but railways and steamers have worked a great change in our notions of distances. We must, however, hear what Cousin Giles has to say before we decide on the subject.”

The lads had not to endure their uncertainty very long before Cousin Giles made his appearance, his somewhat weather-beaten countenance beaming with a glow of benevolence and vivacity which seldom forsook it. Now it must be understood that Cousin Giles was not really the young Markhams’ cousin, any more than he was that of several other families in the county who called him by the same affectionate name. He was a lieutenant in the navy, but, having received a severe wound in battle, which incapacitated him, he considered, from doing his duty properly, he retired from the service, though he ultimately recovered sufficiently to travel about without inconvenience. As in the course of his professional career he had visited the sea-coasts of nearly every part of the world, besides taking journeys inland from them, while he made his observations on what he saw, he possessed a large fund of information. What was also of great consequence, he had a considerable talent for describing what he had seen. Besides possessing these qualifications, being the life and spirit of every juvenile party, and the promoter of all sports and pastimes in-doors and out of doors, he was a welcome guest, both, with old and young, at every friend’s house which he could find time to visit. More than all this, he was a religious, honourable, generous-hearted man. He could not, therefore, fail to be a most desirable travelling companion for his young friends. He had been several times to sea with their father, who was himself a captain in the navy, and who had the greatest confidence in him....