Fred Fearnot's New Ranch and How He and Terry Managed It 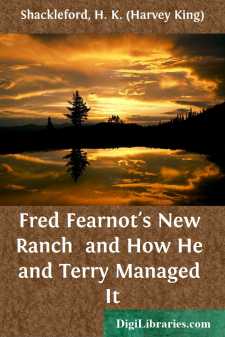 CHAPTER I.FEARNOT AND OLCOTT AT FREEDONIA.

Fearnot and Olcott remained in Wall Street after the great excitement occasioned, by Fred's sudden change of front, when he turned from a bull to a bear in the market, quietly waiting for another chance to make a deal.

All the brokers in the Street had nothing else to talk about for the time being but that singular event, and it became well known that the brokers who had been attempting to crush him the second time narrowly escaped being themselves completely ruined.

Although Fred and Terry didn't reap the benefit of the change as much as they expected, they made a neat little sum, and Broker Bellamy, who had been Fred's most persistent enemy, was so badly crippled that many brokers thought he was completely ruined.

His two nephews, thinking that Fred had been too harsh with their uncle, hired a couple of thugs to give him a good beating, but the news of their intention having reached Fred's ears, Terry kept inside the typewriter's room an hour after the close of business for some time.

One afternoon the thugs entered the room and the leader fell into Fred's terrible grip, and he squeezed his ribs so fiercely that several of them were broken. The wounded slugger's pal was roundly thrashed, too, by Terry, who couldn't resist the temptation to take a hand in it, but he was permitted to take his friend out to the hospital.

The building was so nearly deserted at the time that the news did not get out.

The two young nephews of Broker Bellamy on learning of the failure of their hired assassins, immediately sailed from New York for parts unknown, and all Wall Street became interested in the question of what had become of them, where they had gone and why they had left the city between sunset and sunrise.

Fred and Terry believed that they knew just why they had gone away, but, of course, had no idea where they had gone.

Broker Bellamy, who was very fond of his two stalwart nephews, intimated that he believed that Fred and Terry knew what had become of them, and, from that, the gossips began saying that the old broker had charged Fred and Terry with making way with his two nephews. At first Fred and Terry laughed at it, and so did all Wall Street. Nobody believed it except their enemies, who were willing to believe anything to their discredit.

Terry finally called up Broker Bellamy and took him to task for starting such a report that they had had some hand in making way with his nephews, but the old man, of course, denied the charge, whereupon Terry told him of the hired sluggers who had attacked Fred in his office, and how their attack had proved an absolute failure.

One of the sluggers had died from being shot by a crook after making confession to one of the surgeons that he had been hired by the two Bellamy boys, and that therefore he ought to understand why his nephews had absconded from the city.

The old fellow was dumfounded, and it was probably true when he denied that he knew anything about the attack on Fearnot, and so he refused to make any retraction whatever....