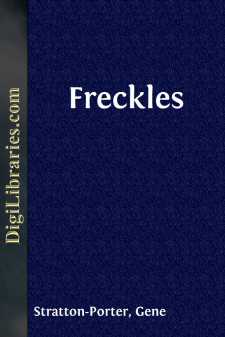 Freckles came down the corduroy that crosses the lower end of the Limberlost. At a glance he might have been mistaken for a tramp, but he was truly seeking work. He was intensely eager to belong somewhere and to be attached to almost any enterprise that would furnish him food and clothing.

Long before he came in sight of the camp of the Grand Rapids Lumber Company, he could hear the cheery voices of the men, the neighing of the horses, and could scent the tempting odors of cooking food. A feeling of homeless friendlessness swept over him in a sickening wave. Without stopping to think, he turned into the newly made road and followed it to the camp, where the gang was making ready for supper and bed.

The scene was intensely attractive. The thickness of the swamp made a dark, massive background below, while above towered gigantic trees. The men were calling jovially back and forth as they unharnessed tired horses that fell into attitudes of rest and crunched, in deep content, the grain given them. Duncan, the brawny Scotch head-teamster, lovingly wiped the flanks of his big bays with handfuls of pawpaw leaves, as he softly whistled, "O wha will be my dearie, O!" and a cricket beneath the leaves at his feet accompanied him. The green wood fire hissed and crackled merrily. Wreathing tongues of flame wrapped around the big black kettles, and when the cook lifted the lids to plunge in his testing-fork, gusts of savory odors escaped.

"I want to speak with the Boss," he said.

The cook glanced at him and answered carelessly: "He can't use you."

The color flooded Freckles' face, but he said simply: "If you will be having the goodness to point him out, we will give him a chance to do his own talking."

With a shrug of astonishment, the cook led the way to a rough board table where a broad, square-shouldered man was bending over some account-books.

"Mr. McLean, here's another man wanting to be taken on the gang, I suppose," he said.

"All right," came the cheery answer. "I never needed a good man more than I do just now."

The manager turned a page and carefully began a new line.

"No use of your bothering with this fellow," volunteered the cook. "He hasn't but one hand."

The flush on Freckles' face burned deeper. His lips thinned to a mere line. He lifted his shoulders, took a step forward, and thrust out his right arm, from which the sleeve dangled empty at the wrist.

"That will do, Sears," came the voice of the Boss sharply. "I will interview my man when I finish this report."

He turned to his work, while the cook hurried to the fires. Freckles stood one instant as he had braced himself to meet the eyes of the manager; then his arm dropped and a wave of whiteness swept him. The Boss had not even turned his head. He had used the possessive. When he said "my man," the hungry heart of Freckles went reaching toward him.

The boy drew a quivering breath. Then he whipped off his old hat and beat the dust from it carefully....