Freaks of Fortune or, Half Round the World 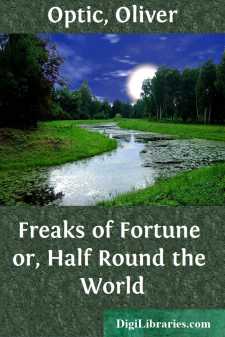 "This is the spot, Bessie," said Levi Fairfield, as he paused on the bank of the brook which flows into the bay near Mike's Point.

"But what was the thing you made?" asked Bessie Watson, as she looked with interest at the place indicated, though she could not see anything very remarkable, or even strange.

"It was a young saw-mill," laughed Levi. "It rested on those flat stones you see there; but the dam is entirely washed away. I made it in Mr. Mogmore's carpenter's shop, near uncle Nathan's house. After a deal of fussing and tinkering, I got it so that it sawed through a board two feet long from one end to the other. It was the proudest day of my life when I showed Mr. Mogmore the two parts, separated by my machine; and he declared I should make a good machinist."

"Where is the saw-mill now?" inquired Bessie, interested in the machine because it had been made by Levi, rather than because she had a taste for mechanics.

"It is up in the attic of uncle Nathan's house; at least it was there three years ago, when I went to live with Mr. Gayles."

"Should you? Well, you shall, if the thing is still in being. I will go down to uncle Nathan's and get it, and then I will set it up, and you shall see it go," answered Levi, as he led the way towards the house of his uncle.

The water privilege which Levi Fairfield, as a boy of thirteen, had improved, was located on the brook behind the cottage of Mr. Mogmore. Bessie did not care to meet uncle Nathan; so she decided to call upon the carpenter's family; for, having spent three seasons at Rockport, she was well acquainted in several families near her father's new house, which was on the shore, not far from Mike's Point.

Bessie—or, as we ought to call her now, Miss Watson, though it does not sound half so pleasant to the ear, and Levi had been several times reproved for addressing her in this formal manner—Miss Watson was "sweet sixteen," or so near it that we give her the full benefit of the majority fraction. If she was pretty at twelve, she was beautiful at sixteen. She was rather tall for her age, but exceedingly well formed. She had spent much of her time in the open air, and on her cheeks glowed the roses of health.

Mrs. McGilvery, a widowed sister of Mr. Watson, who had been the principal of a young ladies' seminary before her marriage, was intrusted with the care of her niece's education. Though Bessie attended school while in the city, yet she was absent four months in the year, during three of which she studied with her governess, on the sea-shore. Fortunately for Bessie, Mrs. McGilvery was an amphibious lady, and was always ready for a trip in The Starry Flag, Levi Fairfield's well-tried craft. She had a taste for yachts, not only in pleasant weather, and on a smooth sea, but when the wind blew anything short of a gale, and the white caps whipped over the gunwale of the boat. Bessie, therefore, was frequently on the salt water with her duenna, and her constitution had been wonderfully strengthened by this healthful exercise....