Frank's Campaign, or, Farm and Camp 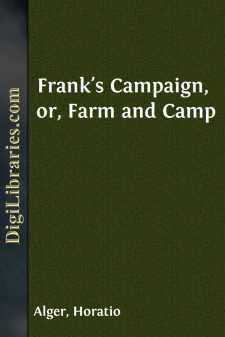 CHAPTER I. THE WAR MEETING

The Town Hall in Rossville stands on a moderate elevation overlooking the principal street. It is generally open only when a meeting has been called by the Selectmen to transact town business, or occasionally in the evening when a lecture on temperance or a political address is to be delivered. Rossville is not large enough to sustain a course of lyceum lectures, and the townspeople are obliged to depend for intellectual nutriment upon such chance occasions as these. The majority of the inhabitants being engaged in agricultural pursuits, the population is somewhat scattered, and the houses, with the exception of a few grouped around the stores, stand at respectable distances, each encamped on a farm of its own.

One Wednesday afternoon, toward the close of September, 1862, a group of men and boys might have been seen standing on the steps and in the entry of the Town House. Why they had met will best appear from a large placard, which had been posted up on barns and fences and inside the village store and postoffice.

It ran as follows:

The citizens of Rossville are invited to meet at the Town Hall, on Wednesday, September 24, at 3 P. M. to decide what measures shall be taken toward raising the town's quota of twenty-five men, under the recent call of the President of the United States. All patriotic citizens, who are in favor of sustaining the free institutions transmitted to us by our fathers, are urgently invited to be present.

The Hon. Solomon Stoddard is expected to address the meeting.

Come one, come all.

At the appointed hour one hundred and fifty men had assembled in the hall. They stood in groups, discussing the recent call and the general management of the war with that spirit of independent criticism which so eminently characterizes the little democracies which make up our New England States.

"The whole thing has been mismanaged from the first," remarked a sapient-looking man with a gaunt, cadaverous face, addressing two listeners. "The Administration is corrupt; our generals are either incompetent or purposely inefficient. We haven't got an officer that can hold a candle to General Lee. Abraham Lincoln has called for six hundred thousand men. What'll he do with 'em when he gets 'em? Just nothing at all. They'll melt away like snow, and then he'll call for more men. Give me a third of six hundred thousand, and I'll walk into Richmond in less'n thirty days."

A quiet smile played over the face of one of the listeners. With a slight shade of irony in his voice he said, "If such are your convictions, Mr. Holman, I think it a great pity that you are not in the service. We need those who have clear views of what is required in the present emergency. Don't you intend to volunteer?"

"I!" exclaimed the other with lofty scorn. "No, sir; I wash my hands of the whole matter. I ain't clear about the justice of warring upon our erring brethren at all. I have no doubt they would be inclined to accept overtures of peace if accompanied with suitable concessions....