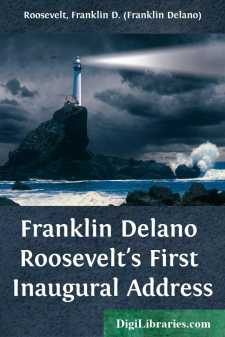 This is a day of national consecration, and I am certain that on this day my fellow Americans expect that on my induction into the Presidency I will address them with a candor and a decision which the present situation of our people impels. This is preeminently the time to speak the truth, the whole truth, frankly and boldly. Nor need we shrink from honestly facing conditions in our country today. This great Nation will endure as it has endured, will revive and will prosper. So, first of all, let me assert my firm belief that the only thing we have to fear is fear itself--nameless, unreasoning, unjustified terror which paralyzes needed efforts to convert retreat into advance. In every dark hour of our national life a leadership of frankness and of vigor has met with that understanding and support of the people themselves which is essential to victory. And I am convinced that you will again give that support to leadership in these critical days.

In such a spirit on my part and on yours we face our common difficulties. They concern, thank God, only material things. Values have shrunk to fantastic levels; taxes have risen; our ability to pay has fallen; government of all kinds is faced by serious curtailment of income; the means of exchange are frozen in the currents of trade; the withered leaves of industrial enterprise lie on every side; farmers find no markets for their produce; and the savings of many years in thousands of families are gone.

More important, a host of unemployed citizens face the grim problem of existence, and an equally great number toil with little return. Only a foolish optimist can deny the dark realities of the moment.

And yet our distress comes from no failure of substance. We are stricken by no plague of locusts. Compared with the perils which our forefathers conquered because they believed and were not afraid, we have still much to be thankful for. Nature still offers her bounty and human efforts have multiplied it. Plenty is at our doorstep, but a generous use of it languishes in the very sight of the supply. Primarily this is because the rulers of the exchange of mankind's goods have failed, through their own stubbornness and their own incompetence, have admitted their failure and have abdicated. Practices of the unscrupulous money changers stand indicted in the court of public opinion, rejected by the hearts and minds of men.

True they have tried, but their efforts have been cast in the pattern of an outworn tradition. Faced by failure of credit they have proposed only the lending of more money. Stripped of the lure of profit by which to induce our people to follow their false leadership, they have resorted to exhortations, pleading tearfully for restored confidence. They only know the rules of a generation of self-seekers. They have no vision, and when there is no vision the people perish.

Yes, the money changers have fled from their high seats in the temple of our civilization. We may now restore that temple to the ancient truths....