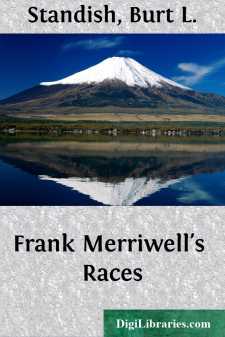 Jack Diamond uttered the exclamation. He was admiring a horse Frank Merriwell had lately purchased.

"He is," agreed Danny Griswold, with his hands thrust deep into his trousers pockets and his short legs set far apart. "But think of paying a thousand dollars!"

"He looks like a racer," declared Bruce Browning, who showed unusual interest and animation for a fellow who was known as the laziest man at Yale.

"He's got the marks of a swift one," asserted Diamond, walking around the bay gelding, which Frank Merriwell had led out into the middle of the stable floor for inspection. "He is rangey, has clean limbs, and a courageous eye. I shouldn't wonder if he could cover ground in a hurry."

"I did not buy him for a racer," asserted Frank. "I purchased him as a saddle horse purely for my own use and pleasure."

"You must have money to burn," chirped Griswold. "Your old man must have made loads of it. I had an uncle four times removed once who made money, but he got arrested when he tried to pass it."

"That reminds me of my father and his partner," said Browning, with apparent seriousness. "They formed a strange sort of a partnership. One of them stayed in New York all the time, while the other remained in California. In this manner they managed always to have plenty of money between them."

"Oh, goodness!" gasped Diamond, "if you fellows keep this up, I shall want to get away."

"If you want to get a weigh, we'll try to find some scales for you," chuckled Griswold, his eyes twinkling.

"I've heard so," admitted Browning. "But Dorman is too mean to make much of a drain on the old man's pile."

"That's right," nodded Griswold. "Why, he is so mean that in the winter, when his hair gets long, he wets it thoroughly, and then goes out in the open air and lets it freeze."

"What does he do that for?"

"So he can break it off and save the price of a hair-cut!"

"Say," cried Diamond, desperately, "I thought you fellows were talking about a horse!"

"No," yawned Browning, "we're talking about a jackass."

Every one but Jack seemed to appreciate this, for they all grinned.

"Well," said the lad from Virginia, "Merriwell has brought out his horse for us to inspect, and I move we do so. After this is over, you may talk of anything you please."

"It is rather remarkable that you should pay such a price for a mere saddle horse," declared Browning.

"The one I made to myself when this horse enabled me to overtake a runaway that was dragging Winifred Lee to danger and possible death. This is the animal on which I pursued the runaway, and I took him without asking leave of the owner. I vowed that if this horse enabled me to catch and stop the runaway before Miss Lee was harmed I would own the creature if it took my last dollar," he added.

"And that," cried Griswold, trying to strike a dramatic attitude—"that is true love!"