Frank Fairlegh Scenes From The Life Of A Private Pupil 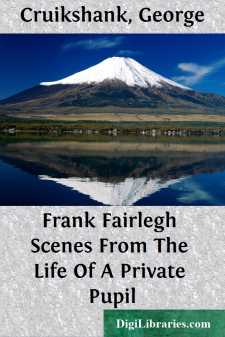 CHAPTER I — ALL RIGHT! OFF WE GO! "Yet here... you are stayed for... There; my blessing with you,And these few precepts in thy memorySee thou character——-""Home-keeping youth have ever homely wits.I rather would entreat thy companyTo see the wonders of the world abroad,Than living dully, sluggardis'd at home,Wear out thy youth with shapeless idleness.""Where unbruised youth, with unstuff'd brain,Doth couch his limbs, there golden sleep doth reign."Shakspeare

"NEVER forget, under any circumstances, to think and act like a gentleman, and don't exceed your allowance," said my father.

"Mind you read your Bible, and remember what I told you about wearing flannel waistcoats," cried my mother.

And with their united "God bless you, my boy!" still ringing in my ears, I found myself inside the stage-coach, on my way to London.

Now, I am well aware that the correct thing for a boy in my situation (i.e. leaving home for the first time) would be to fall back on his seat, and into a reverie, during which, utterly lost to all external impressions, he should entertain the thoughts and feelings of a well-informed man of thirty; the same thoughts and feelings being clothed in the semi-poetic prose of a fashionable novel-writer. Deeply grieved, therefore, am I at being forced both to set at nought so laudable an established precedent, and to expose my own degeneracy. But the truth must be told at all hazards. The only feeling I experienced, beyond a vague sense of loneliness and desolation, was one of great personal discomfort. It rained hard, so that a small stream of water, which descended from the roof of the coach as I entered it, had insinuated itself between one of the flannel waistcoats, which formed so important an item in the maternal valediction, and my skin, whence, endeavouring to carry out what a logician would call the "law of its being," by finding its own level, it placed me in the undesirable position of an involuntary disciple of the cold-water cure taking a "sitz-bad". As to my thoughts, the reader shall have the full benefit of them, in the exact order in which they flitted through my brain.

First came a vague desire to render my position more comfortable, ending in a forlorn hope that intense and continued sitting might, by some undefined process of evaporation, cure the evil. This suggested a speculation, half pleasing and half painful, as to what would be my mother's feelings could she be aware of the state of things; the pleasure being the result of that mysterious preternatural delight which a boy always takes in everything at all likely to injure his health, or endanger his existence, and the pain arising from the knowledge that there was now no one near me to care whether I was comfortable or not. Again, these speculations merged into a sort of dreamy wonder, as to why a queer little old gentleman opposite (my sole fellow-traveller) was grunting like a pig, at intervals of about a minute, though he was wide awake the whole time; and whether a small tuft of hair, on a mole at the tip of his nose, could have anything to do with it....