France in the Nineteenth Century 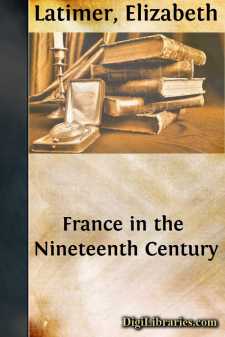 CHARLES X. AND THE DAYS OF JULY.

Louis XVIII. in 1815 returned to his throne, borne on the shoulders of foreign soldiers, after the fight at Waterloo. The allied armies had a second time entered France to make her pass under the saws and harrows of humiliation. Paris was gay, for money was spent freely by the invading strangers. Sacrifices on the altar of the Emperor were over; enthusiasm for the extension of the great ideas of the Revolution had passed away; a new generation had been born which cared more for material prosperity than for such ideas; the foundation of many fortunes had been laid; mothers who dreaded the conscription, and men weary of war and politics, drew a long breath, and did not regret the loss of that which had animated a preceding generation, in a view of a peace which was to bring wealth, comfort, and tranquillity into their own homes.

The bourgeoisie of France trusted that it had seen the last of the Great Revolution. It stood between the working-classes, who had no voice in the politics of the Restoration, and the old nobility,—men who had returned to France full of exalted expectations. The king had to place himself on one side or the other. He might have been the true Page 10 Bourbon and headed the party of the returned émigrés,—in which case his crown would not have stayed long upon his head; or he might have made himself king of the bourgeoisie, opposed to revolution, Napoleonism, or disturbances of any kind,—the party, in short, of the Restoration of Peace: a peace that might outlast his time; et après moi le déluge!

But animals which show neither teeth nor claws are seldom left in peace, and Louis XVIII.'s reign—from 1814 to 1824—was full of conspiracies. The royalty of the Restoration was only an ornament tacked on to France. The Bourbon dynasty was a necessary evil, even in the eyes of its supporters. "The Bourbons," said Chateaubriand, "are the foam on the revolutionary wave that has brought them back to power;" whilst every one knows Talleyrand's famous saying "that after five and twenty years of exile they had nothing remembered and nothing forgot." Of course the old nobility, who flocked back to France in the train of the allied armies, expected the restoration of their estates. The king had got his own again,—why should not they get back theirs? And they imagined that France, which had been overswept by successive waves of revolution, could go back to what she had been under the old régime. This was impossible. The returned exiles had to submit to the confiscation of their estates, and receive in return all offices and employments in the gift of the Government. The army which had conquered in a hundred battles, with its marshals, generals, and vieux moustaches, was not pleased to have young officers, chosen from the nobility, receive commissions and be charged with important commands. On the other hand, the Holy Alliance expected that the king of France would join the despotic sovereigns of Russia, Austria, and Prussia in their crusade against liberal ideas in other countries....