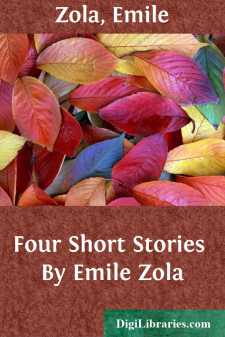 At nine o'clock in the evening the body of the house at the Theatres des Varietes was still all but empty. A few individuals, it is true, were sitting quietly waiting in the balcony and stalls, but these were lost, as it were, among the ranges of seats whose coverings of cardinal velvet loomed in the subdued light of the dimly burning luster. A shadow enveloped the great red splash of the curtain, and not a sound came from the stage, the unlit footlights, the scattered desks of the orchestra. It was only high overhead in the third gallery, round the domed ceiling where nude females and children flew in heavens which had turned green in the gaslight, that calls and laughter were audible above a continuous hubbub of voices, and heads in women's and workmen's caps were ranged, row above row, under the wide-vaulted bays with their gilt-surrounding adornments. Every few seconds an attendant would make her appearance, bustling along with tickets in her hand and piloting in front of her a gentleman and a lady, who took their seats, he in his evening dress, she sitting slim and undulant beside him while her eyes wandered slowly round the house.

Two young men appeared in the stalls; they kept standing and looked about them.

"Didn't I say so, Hector?" cried the elder of the two, a tall fellow with little black mustaches. "We're too early! You might quite well have allowed me to finish my cigar."

An attendant was passing.

"Oh, Monsieur Fauchery," she said familiarly, "it won't begin for half an hour yet!"

"Then why do they advertise for nine o'clock?" muttered Hector, whose long thin face assumed an expression of vexation. "Only this morning Clarisse, who's in the piece, swore that they'd begin at nine o'clock punctually."

For a moment they remained silent and, looking upward, scanned the shadowy boxes. But the green paper with which these were hung rendered them more shadowy still. Down below, under the dress circle, the lower boxes were buried in utter night. In those on the second tier there was only one stout lady, who was stranded, as it were, on the velvet-covered balustrade in front of her. On the right hand and on the left, between lofty pilasters, the stage boxes, bedraped with long-fringed scalloped hangings, remained untenanted. The house with its white and gold, relieved by soft green tones, lay only half disclosed to view, as though full of a fine dust shed from the little jets of flame in the great glass luster.

"Did you get your stage box for Lucy?" asked Hector.

"Yes," replied his companion, "but I had some trouble to get it. Oh, there's no danger of Lucy coming too early!"

He stifled a slight yawn; then after a pause:

"You're in luck's way, you are, since you haven't been at a first night before. The Blonde Venus will be the event of the year. People have been talking about it for six months. Oh, such music, my dear boy! Such a sly dog, Bordenave! He knows his business and has kept this for the exhibition season." Hector was religiously attentive....