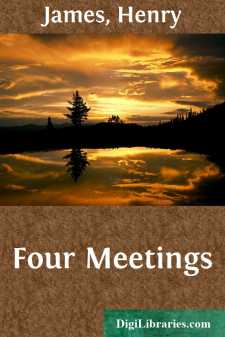 The first one took place in the country, at a little tea-party, one snowy night. It must have been some seventeen years ago. My friend Latouche, going to spend Christmas with his mother, had persuaded me to go with him, and the good lady had given in our honor the entertainment of which I speak. To me it was really entertaining; I had never been in the depths of New England at that season. It had been snowing all day, and the drifts were knee-high. I wondered how the ladies had made their way to the house; but I perceived that at Grimwinter a conversazione offering the attraction of two gentlemen from New York was felt to be worth an effort.

Mrs. Latouche, in the course of the evening, asked me if I "did n't want to" show the photographs to some of the young ladies. The photographs were in a couple of great portfolios, and had been brought home by her son, who, like myself, was lately returned from Europe. I looked round and was struck with the fact that most of the young ladies were provided with an object of interest more absorbing than the most vivid sun-picture. But there was a person standing alone near the mantelshelf, and looking round the room with a small gentle smile which seemed at odds, somehow, with her isolation. I looked at her a moment, and then said, "I should like to show them to that young lady."

"Oh, yes," said Mrs. Latouche, "she is just the person. She doesn't care for flirting; I will speak to her."

I rejoined that if she did not care for flirting, she was, perhaps, not just the person; but Mrs. Latouche had already gone to propose the photographs to her.

"She's delighted," she said, coming back. "She is just the person, so quiet and so bright." And then she told me the young lady was, by name, Miss Caroline Spencer, and with this she introduced me.

Miss Caroline Spencer was not exactly a beauty, but she was a charming little figure. She must have been close upon thirty, but she was made almost like a little girl, and she had the complexion of a child. She had a very pretty head, and her hair was arranged as nearly as possible like the hair of a Greek bust, though indeed it was to be doubted if she had ever seen a Greek bust. She was "artistic," I suspected, so far as Grimwinter allowed such tendencies. She had a soft, surprised eye, and thin lips, with very pretty teeth. Round her neck she wore what ladies call, I believe, a "ruche," fastened with a very small pin in pink coral, and in her hand she carried a fan made of plaited straw and adorned with pink ribbon. She wore a scanty black silk dress. She spoke with a kind of soft precision, showing her white teeth between her narrow but tender-looking lips, and she seemed extremely pleased, even a little fluttered, at the prospect of my demonstrations. These went forward very smoothly, after I had moved the portfolios out of their corner and placed a couple of chairs near a lamp. The photographs were usually things I knew,—large views of Switzerland, Italy, and Spain, landscapes, copies of famous buildings, pictures, and statues. I said what I could about them, and my companion, looking at them as I held them up, sat perfectly still, with her straw fan raised to her underlip. Occasionally, as I laid one of the pictures down, she said very softly, "Have you seen that place?" I usually answered that I had seen it several times (I had been a great traveller), and then I felt that she looked at me askance for a moment with her pretty eyes. I had asked her at the outset whether she had been to Europe; to this she answered, "No, no, no," in a little quick, confidential whisper. But after that, though she never took her eyes off the pictures, she said so little that I was afraid she was bored....