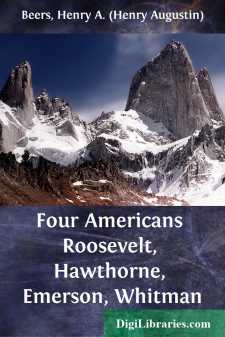 ROOSEVELT AS MAN OF LETTERS

In a club corner, just after Roosevelt's death, the question was asked whether his memory would not fade away, when the living man, with his vivid personality, had gone. But no: that personality had stamped itself too deeply on the mind of his generation to be forgotten. Too many observers have recorded their impressions; and already a dozen biographies and memoirs have appeared. Besides, he is his own recorder. He published twenty-six books, a catalogue of which any professional author might be proud; and a really wonderful feat when it is remembered that he wrote them in the intervals of an active public career as Civil Service Commissioner, Police Commissioner, member of his state legislature, Governor of New York, delegate to the National Republican Convention, Colonel of Rough Riders, Assistant Secretary of the Navy, Vice-President and President of the United States.

Perhaps in some distant future he may become a myth or symbol, like other mighty hunters of the beast, Nimrod and Orion and Tristram of Lyonesse. Yet not so long as "African Game Trails" and the "Hunting Trips of a Ranchman" endure, to lift the imagination to those noble sports denied to the run of mortals by poverty, feebleness, timidity, the engrossments of the humdrum, everyday life, or lack of enterprise and opportunity. Old scraps of hunting song thrill us with the great adventure: "In the wild chamois' track at break of day"; "We'll chase the antelope over the plain"; "Afar in the desert I love to ride"; and then we go out and shoot at a woodchuck, with an old double-barrelled shotgun—and miss! If Roosevelt ever becomes a poet, it is while he is among the wild creatures and wild landscapes that he loved: in the gigantic forests of Brazil, or the almost unnatural nature of the Rockies and the huge cattle ranches of the plains, or on the limitless South African veldt, which is said to give a greater feeling of infinity than the ocean even.

Roosevelt was so active a person—not to say so noisy and conspicuous; he so occupied the centre of every stage, that, when he died, it was as though a wind had fallen, a light had gone out, a military band had stopped playing. It was not so much the death of an individual as a general lowering in the vitality of the nation. America was less America, because he was no longer here. He should have lived twenty years more had he been willing to go slow, to loaf and invite his soul, to feed that mind of his in a wise passiveness. But there was no repose about him, and his pleasures were as strenuous as his toils. John Burroughs tells us that he did not care for fishing, the contemplative man's recreation. No contemplation for him, but action; no angling in a clear stream for a trout or grayling; but the glorious, dangerous excitement of killing big game—grizzlies, lions, African buffaloes, mountain sheep, rhinoceroses, elephants. He never spared himself: he wore himself out. But doubtless he would have chosen the crowded hour of glorious life—or strife, for life and strife were with him the same.

He was above all things a fighter, and the favorite objects of his denunciation were professional pacifists, nice little men who had let their muscles get soft, and nations that had lost their fighting edge. Aggressive war, he tells us in "The Winning of the West," is not always bad. "Americans need to keep in mind the fact that, as a nation, they have erred far more often in not being willing enough to fight than in being too willing." "Cowardice," he writes elsewhere, "in a race, as in an individual, is the unpardonable sin." Is this true? Cowardice is a weakness, perhaps a disgraceful weakness: a defect of character which makes a man contemptible, just as foolishness does. But it is not a sin at all, and surely not an unpardonable one. Cruelty, treachery, and ingratitude are much worse traits, and selfishness is as bad. I have known very good men who were cowards; men that I liked and trusted but who, from weakness of nerves or other physical causes—perhaps from prenatal influences—were easily frightened and always constitutionally timid....