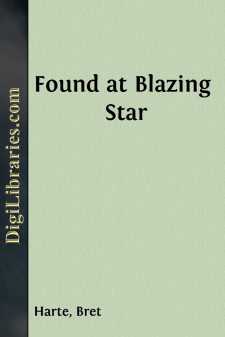 The rain had only ceased with the gray streaks of morning at Blazing Star, and the settlement awoke to a moral sense of cleanliness, and the finding of forgotten knives, tin cups, and smaller camp utensils, where the heavy showers had washed away the debris and dust heaps before the cabin doors. Indeed, it was recorded in Blazing Star that a fortunate early riser had once picked up on the highway a solid chunk of gold quartz which the rain had freed from its incumbering soil, and washed into immediate and glittering popularity. Possibly this may have been the reason why early risers in that locality, during the rainy season, adopted a thoughtful habit of body, and seldom lifted their eyes to the rifted or india-ink washed skies above them.

"Cass" Beard had risen early that morning, but not with a view to discovery. A leak in his cabin roof,—quite consistent with his careless, improvident habits,—had roused him at 4 A. M., with a flooded "bunk" and wet blankets. The chips from his wood pile refused to kindle a fire to dry his bed-clothes, and he had recourse to a more provident neighbor's to supply the deficiency. This was nearly opposite. Mr. Cassius crossed the highway, and stopped suddenly. Something glittered in the nearest red pool before him. Gold, surely! But, wonderful to relate, not an irregular, shapeless fragment of crude ore, fresh from Nature's crucible, but a bit of jeweler's handicraft in the form of a plain gold ring. Looking at it more attentively, he saw that it bore the inscription, "May to Cass."

Like most of his fellow gold-seekers, Cass was superstitious. "Cass!" His own name! He tried the ring. It fitted his little finger closely. It was evidently a woman's ring. He looked up and down the highway. No one was yet stirring. Little pools of water in the red road were beginning to glitter and grow rosy from the far-flushing east, but there was no trace of the owner of the shining waif. He knew that there was no woman in camp, and among his few comrades in the settlement he remembered to have seen none wearing an ornament like that. Again, the coincidence of the inscription to his rather peculiar nickname would have been a perennial source of playful comment in a camp that made no allowance for sentimental memories. He slipped the glittering little hoop into his pocket, and thoughtfully returned to his cabin.

Two hours later, when the long, straggling procession, which every morning wended its way to Blazing Star Gulch,—the seat of mining operations in the settlement,—began to move, Cass saw fit to interrogate his fellows. "Ye didn't none on ye happen to drop anything round yer last night?" he asked, cautiously.

"I dropped a pocketbook containing government bonds and some other securities, with between fifty and sixty thousand dollars," responded Peter Drummond, carelessly; "but no matter, if any man will return a few autograph letters from foreign potentates that happened to be in it,—of no value to anybody but the owner,—he can keep the money. Thar's nothin' mean about me," he concluded, languidly.

This statement, bearing every evidence of the grossest mendacity, was lightly passed over, and the men walked on with the deepest gravity.

"But hev you?" Cass presently asked of another.

"I lost my pile to Jack Hamlin at draw-poker, over at Wingdam last night," returned the other, pensively, "but I don't calkilate to find it lying round loose."

Forced at last by this kind of irony into more detailed explanation, Cass confided to them his discovery, and produced his treasure. The result was a dozen vague surmises,—only one of which seemed to be popular, and to suit the dyspeptic despondency of the party,—a despondency born of hastily masticated fried pork and flapjacks....