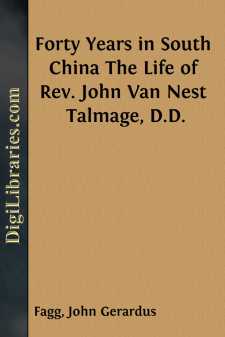 I. THE ANCESTRAL HOME

John Van Nest Talmage was born at Somerville, New Jersey, August 18, 1819He was the fourth son in a family of seven brothers and five sisters.

The roots of the Talmage genealogical tree may be traced back to the year 1630, when Enos and Thomas Talmage, the progenitors of the Talmage family in North America, landed at Charlestown, Massachusetts, and afterwards settled at East Hampton, Long Island.

In 1725 we find Daniel Talmage at Elizabethtown, New Jersey. Daniel's grandson, Thomas, during the years between 1775 and 1834 shifts his tent to Piscataway, New Jersey, thence to New Brunswick, thence to Somerville, where the stakes are driven firmly on a farm "beautiful for situation." Thomas Talmage was a builder by trade, and erected some of the most important courthouses and public edifices in Somerset and Middlesex Counties. He was active in the Revolutionary war, holding the rank of major. It was said of him, "His name will be held in everlasting remembrance in the churches." He was the father of seven sons and six daughters.

The third son, David T., the father of John Van Nest Talmage, was born at Piscataway, April 21, 1783. He was married to Catharine Van Nests Dec. 19, 1803. David T. Talmage was rather migratory in his instincts. The smoke of the Talmage home now curled out from a house at Mill stone, now from a homestead near Somerville, then from Gateville; then the family ark rested for many years on the outskirts of Somerville and finally it brought up at Bound Brook, New Jersey. Though the family tent was folded several times, it was not folded for more than a day's wagon journey before it was pitched again. The places designated arc all within the range of a single New Jersey county.

In 1836 David T. Talmage was elected a member of the State Legislature and was returned three successive terms. In 1841, he was chosen high sheriff of Somerset County. Four of his sons entered the Christian ministry, James R., John Van Nest, Goyn, and Thomas De Witt. James R., the senior brother, rendered efficient service in pastorates at Pompton Plains and Blawenburgh, New Jersey, and in Brooklyn, Greenbush, and Chittenango, New York. He received the degree of Doctor of Divinity from Rutgers College, New Jersey, in 1864. John Van Nest gave his life to China. Goyn, a most winsome man and eloquent preacher, ministered with marked success to the churches of Niskayuna, Green Point, Rhinebeck, and Port Jervis, New York, and Paramus, New Jersey. He was for five years the Corresponding Secretary of the Board of Domestic Missions of the Reformed Church. Rutgers College honored herself and him by giving him the degree of Doctor of Divinity in 1876....