Forty-Six Years in the Army 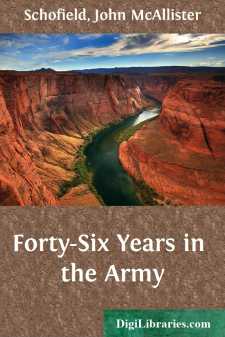 I was born in the town of Gerry, Chautauqua County, New York, September 29, 1831. My father was the Rev. James Schofield, who was then pastor of the Baptist Church in Sinclairville, and who was from 1843 to 1881 a "home missionary" engaged in organizing new churches and building "meeting-houses" in Illinois, Iowa, and Missouri. My mother was Caroline McAllister, daughter of John McAllister of Gerry. We removed to Illinois in June, 1843, and, after a short stay in Bristol, my father made a new home for his family in Freeport, where he began his missionary work by founding the First Baptist Church of that place.

In all my childhood and youth I had what I regard as the best possible opportunities for education, in excellent public schools where the rudiments of English were taught with great thoroughness, and in a fair amount of all kinds of manly sports, and in hard work, mainly on the farm and in building a new home, which left no time and little inclination for any kind of mischief. At sixteen years of age I spent three months in surveying public lands in the wilds of northern Wisconsin, and at seventeen taught district school in the little town of Oneco. By that time I had chosen the law as my profession, and was working hard to complete the preparatory studies at my own expense.

The winter's school term in Oneco having closed early in the spring of 1849, I returned to Freeport and resumed my struggle with Latin. Then an unforseen event turned the course of my life. The young man who had been appointed to West Point from our district only a year or two before had failed to continue his course in the Military Academy. Thus a vacancy occurred just at the close of Mr. Thomas J. Turner's term in Congress. There was no time for applications or for consultation. He must select another candidate to enter the following June, or leave the place to be filled by his successor. Fortunately for me, Mr. Turner, as one of the public-school directors, had been present at an examination where the subject with which I had to deal was mathematical; if he had caught me at Latin, the result must have been fatal to all my prospects. Besides, Mr. Turner had heard from his brother James of the stamina I had shown in the public land-surveying expedition; and also from my father of my determination to get a good education before beginning the study of law. So he brought me a cadet appointment when he came home, and said he believed a boy with that record could get through West Point, the training there being, in his opinion, a good preparation for the study of law.

The little savings from all my past work had been invested in a piece of land which was sold to fit me out for my journey to West Point, including some inexpensive visits en route. I reported at the Academy on June 1, 1849, with less than two dollars in my pocket, which I conscientiously deposited with the treasurer, as required by the regulations. My reception was of the most satisfactory character....