Forty-one years in India From Subaltern To Commander-In-Chief 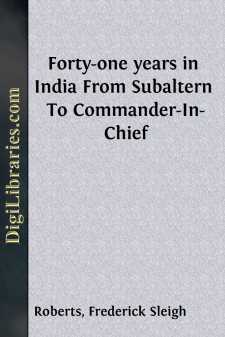 Forty years ago the departure of a cadet for India was a much more1852 serious affair than it is at present. Under the regulations then in force, leave, except on medical certificate, could only be obtained once during the whole of an officer's service, and ten years had to be spent in India before that leave could be taken. Small wonder, then, that I felt as if I were bidding England farewell for ever when, on the 20th February, 1852, I set sail from Southampton with Calcutta for my destination. Steamers in those days ran to and from India but once a month, and the fleet employed was only capable of transporting some 2,400 passengers in the course of a year. This does not include the Cape route; but even taking that into consideration, I should doubt whether there were then as many travellers to India in a year as there are now in a fortnight at the busy season.

My ship was the Peninsular and Oriental Company's steamer Ripon, commanded by Captain Moresby, an ex-officer of the Indian Navy, in which he had earned distinction by his survey of the Red Sea. A few Addiscombe friends were on board, leaving England under the same depressing circumstances as myself, and what with wind and weather, and the thought that at the best we were bidding farewell to home and relations for ten long years, we were anything but a cheerful party for the first few days of the voyage. Youth and high spirits had, however, re-asserted themselves long before Alexandria, which place we reached without incident beyond the customary halts for coaling at Gibraltar and Malta. At Alexandria we bade adieu to Captain Moresby, who had been most kind and attentive, and whose graphic accounts of the difficulties he had had to overcome whilst mastering the navigation of the Red Sea served to while away many a tedious hour.

On landing at Alexandria, we were hurried on board a large mast-less canal boat, shaped like a Nile dahabeah. In this we were towed[Page 2] up the Mahmoudieh canal for ten hours, until we arrived at Atfieh, on the Nile; thence we proceeded by steamer, reaching Cairo in about sixteen hours. Here we put up at Shepherd's Hotel for a couple of days, which were most enjoyable, especially to those of the party who, like myself, saw an eastern city and its picturesque and curious bazaars for the first time. From Cairo the route lay across the desert for ninety miles, the road being merely a cutting in the sand, quite undistinguishable at night. The journey was performed in a conveyance closely resembling a bathing-machine, which accommodated six people, and was drawn by four mules. My five fellow-travellers were all cadets, only one of whom (Colonel John Stewart, of Ardvorlich, Perthshire) is now alive. The transit took some eighteen hours, with an occasional halt for refreshments. Our baggage was carried on camels, as were the mails, cargo, and even the coal for the Red Sea steamers.

On arrival at Suez we found awaiting us the Oriental, commanded by Captain Powell. A number of people met us there who had left England a month before we did; but their steamer having broken down, they had now to be accommodated on board ours....