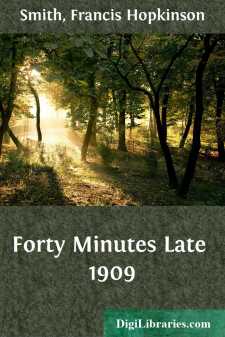 It began to snow half an hour after the train started—a fine-grained, slanting, determined snow that forced its way between the bellows of the vestibules, and deposited itself in mounds of powdered salt all over the platforms and steps. Even the porter had caught some puffs on his depot coat with the red cape, and so had the conductor, from the way he thrashed his cap on the back of the seat in front of mine. "Yes, gettin' worse," he said in answer to an inquiring lift of my eyebrows. "Everything will be balled up if this keeps on."

"Shall we make the connection at Bondville?" I was to lecture fifty miles from Bondville Junction, and had but half an hour lee-way.

If the man with the punch heard, he made no answer. The least said the soonest mended in crises like this. If we arrived on time every passenger would grab his bag and bolt out without thanking him or the road, or the engineer who took the full blast of the storm on his chest and cheeks. If we missed the connection, any former hopeful word would only add another hot coal to everybody's anger.

I fell back on the porter.

"Yes' sir, she'll be layin' jes' 'cross de platform. She knows we're comin'. Sometimes she waits ten minutes—sometimes she don't; more times I seen her pullin' out while we was pullin' in."

Not very reassuring this. Only one statement was of value—the position of the connecting train when we rolled into Bondville.

I formulated a plan: The porter would take one bag, I the other—we would both stand on the lower step of the Pullman, then make a dash. If she was pulling out as we pulled in, a goatlike spring on my part might succeed; the bags being hurled after me to speed the animal's motion.

One hour later we took up our position.

There came a jolt, a Saturday-afternoon slide across the ice-covered platform, an outstretched greasy hand held down from the step of the moving train, followed by the chug of a bag that missed my knees by a hand's breadth—and I was hauled on board.

The contrast between a warm, velvet-lined Pullman and a cane-seated car with both doors opened every ten minutes was anything but agreeable; but no discomfort should count when a lecturer is trying to make his connection. That is what he is paid for and that he must do at all hazards and at any cost, even to chartering a special train, the price devouring his fee.

Once in my seat an account of stock was taken—two bags, an umbrella, overcoat, two gum shoes (one off, one on), manuscript of lecture in bag, eye-glasses in outside pocket of waistcoat. This over, I spread myself upon the cane seat and took in the situation. It was four o'clock (the lecture was at eight); Sheffield was two hours away; this would give time to change my dress and get something to eat. The committee, moreover, were to meet me at the depot with a carriage and drive me to where I was "to spend the night and dine"—so the chairman's letter read. The suppressed smile on the second conductor's face when he punched my ticket and read the name of "Sheffield" sent my hand into my pocket in search of this same letter. Yes—there was no mistake about it,—"Our carriage," it read, "will meet you," etc., etc.

The confirmation brought with it a certain thrill; not a carriage picked up out of the street, or a lumbering omnibus—a mere go-between from station to hotels—but "our carriage!" Nothing like these lecture associations, I thought,—nothing like these committees, for making strangers comfortable....