Forests of Maine Marco Paul's Adventures in Pursuit of Knowledge 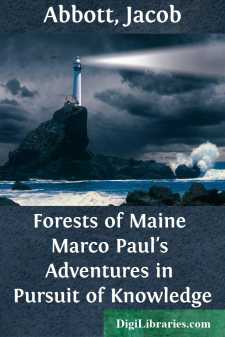 CHAPTER I. THE MOUTH OF THE KENNEBEC.

One summer, Forester and Marco Paul formed a plan for going to Quebec. Marco was very much interested in going to Quebec, as he wanted to see the fortifications. Forester had told him that Quebec was a strongly-fortified city, being a military post of great importance, belonging to the British government. Marco was very much pleased at the idea of seeing the fortifications, and the soldiers that he supposed must be placed there to defend them.

On their way to Quebec, they had to sail up the Kennebec in a steamboat. As they were passing along, Marco and Forester sat upon the deck. It was a pleasant summer morning. They had been sailing all night upon the sea, on the route from Boston to the mouth of the Kennebec. They entered the mouth of the Kennebec very early in the morning, just before Forester and Marco got up. And thus it happened that when they came up upon the deck, they found that they were sailing in a river. The water was smooth and glassy, shining brilliantly under the rays of the morning sun, which was just beginning to rise.

The shores of the river were rocky and barren. Here and there, in the coves and eddies, were what appeared to Marco to be little fences in the water. Forester told him that they were for catching fish. The steamboat moved very slowly, and every moment the little bell would ring, and the engine would stop. Then the boat would move more slowly still, until the bell sounded again for the engine to be put in motion, and then the boat would go on a little faster.

"The water is very low this morning," said Forester, "and they have to proceed very carefully, or else they will get aground."

"What makes the water so low now?" asked Marco.

"There are two reasons," replied Forester. "It is late in the summer, and the streams and springs are all low; so that there is but little water to come down from the country above. Then, besides, the tide is low this morning in the sea, and that causes what water there is in the bed of the river to run off into the sea."

"Is not there any tide in the river?" asked Marco.

"No," said Forester, "I suppose there is not, strictly speaking. That is, the moon, which attracts the waters of the ocean, and makes them rise and fall in succession, produces no sensible effect upon the waters of a river. But then the rise and fall of the sea itself causes all rivers to rise and fall near their mouths, and as far up as the influence of the sea extends. You see, in fact, that it must be so."

"I wonder whether the water is salt here," said Marco....