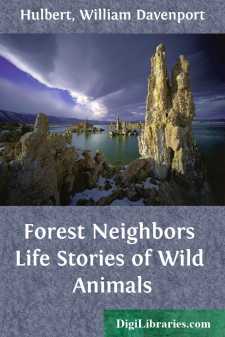 INTRODUCTION Some thirty years ago, while out on one of his landlooking trips in the woods of Northern Michigan, my father came upon a little lake which seemed to him the loveliest that he had ever seen, though he had visited many in the course of his explorations. The wild ponds are very apt to be shallow and muddy, with low, marshy shores; but this one was deep and clear, and its high banks were clothed with a splendid growth of beech, maple and birch. Tall elms stood guard along the water's edge, and here and there the hardwood forest was broken by dark hemlock groves, and groups of lordly pine-trees, lifting their great green heads high above their deciduous neighbors. Only in one place, around the extreme eastern end, the ground was flat and wet; and there the tamarack swamp showed golden yellow in October, and light, delicate green in late spring. Wild morning-glories grew on the grassy point that put out from the northern shore, and in the bays the white water-lilies were blossoming. Nearly two miles long and three-quarters of a mile wide, it lay basking and shimmering in the sunshine, a big, broad, beautiful sheet of water set down in the very heart of the woods.

There were no settlers anywhere near, nor even any Indians, yet there was no lack of inhabitants. Bears and wolves and a host of smaller animals were to be found, and along the shores were runways that had been worn deep in the soil by the tread of generation after generation of dainty little cloven hoofs. I suppose that some of those paths have been used by the deer for hundreds, and perhaps thousands, of years.

The lands around the entire lake were offered for sale by the United States Government at the ridiculously low price which Uncle Sam has asked for most of his possessions; and with the help of some friends my father bought the whole shore. During the years which followed he was occupied in various ways, and some of the best recollections of my boyhood are of the days and the nights which I spent with him on his fishing-tug, steaming about the Straits of Mackinac and the northern part of Lake Huron. But he could not forget the Glimmerglass, that little wild lake up in the woods. He had fallen in love with it at first sight, and at last he took his family and went there to live.

Human neighbors were scarce around the lake, and perhaps that was one reason why we took such a lively interest in the other residents—those who were there ahead of us. "Him and me's chums," my small sister said of the red-squirrel that hung around the log-barn. And some of the animals seemed to take a very lively interest in us. The chipmunks came into the house occasionally, on foraging expeditions; and so, I regret to say, did the skunks. There was a woodchuck who used to come to the back door, looking for scraps, and who learned to sit bolt upright and hold a pancake in his fore paws while he nibbled at it, without being in the least disturbed by the presence and the comments of half a dozen spectators....