Forest and Frontiers Or, Adventures Among the Indians 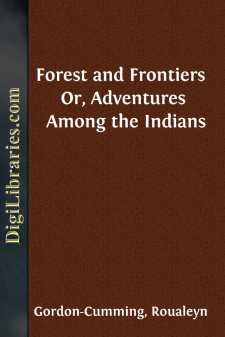 The first incident of his career, to which we invite the reader's attention, is one which he calls an attack on four patriarchal lions. It occurred in the interior of Africa, not far from the junction of the rivers Mariqua and Limpopo. He thus describes it.

A few days after this, just as Swint had milked the cows, and was driving them from the wooded peninsula in which we lay, athwart the open ground, to graze with my other cattle in the forest beyond, he beheld four majestic lions walking slowly across the valley, a few hundred yards below my camp, and disappear over the river's bank, at a favorite drinking place. These mighty monarchs of the waste had been holding a prolonged repast over the carcases of some zebras killed by Present, and had now come down the river to slake their thirst. This being reported, I instantly saddled two horses, and, directing my boys to lead after me as quickly as possible my small remaining pack of sore-footed dogs, I rode forth, accompanied by Carey carrying a spare gun, to give battle to the four grim lions. As I rode out of the peninsula, they showed themselves on the banks of the river, and, guessing that their first move would be a disgraceful retreat, I determined to ride so as to make them think that I had not observed them, until I should be able to cut off their retreat from the river, across the open vley, to the endless forest beyond. That point being gained, I knew that they, still doubtful of my having observed them, would hold their ground on the river's bank until my dogs came up, when I could more advantageously make the attack.

I cantered along, holding as if I meant to pass the lions at a distance of a quarter of a mile, until I was opposite to them, when I altered my course, and inclined a little nearer. The lions showed symptoms of uneasiness; they rose to their feet, and, overhauling us for half a minute, disappeared over the bank. They reappeared, however, directly, a little farther down; and finding that their present position was bare, they walked majestically along the top of the bank to a spot a few hundred yards lower, where the bank was well wooded. Here they seemed half inclined to await my attack; two stretched out their massive arms, and lay down in the grass, and the other two sat up like dogs upon their haunches. Deeming it probable that when my dogs came up and I approached they would still retreat and make a bolt across the vley, I directed Carey to canter forward and take up the ground in the centre of the vley about four hundred yards in advance; whereby the lions would be compelled either to give us battle or swim the river, which, although narrow, I knew they would be very reluctant to do.

I now sat in my saddle, anxiously waiting the arrival of my dogs; and whilst thus momentarily disengaged, I was much struck with the majestic and truly appalling appearance which these four noble lions exhibited. They were all full-grown immense males; and I felt, I must confess, a little nervous, and very uncertain as to what might be the issue of the attack....