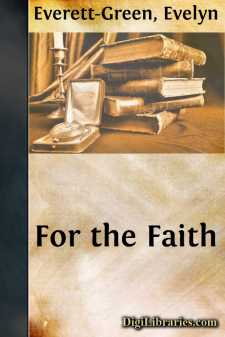 Chapter I: The House by the Bridge.

"Holy Church has never forbidden it," said John Clarke, with a very intent look upon his thoughtful, scholar's face.

A young man who stood with his elbow on the mantelshelf, his eye fixed eagerly on the speaker's face, here broke in with a quick impetuosity of manner, which seemed in keeping with his restless, mobile features, his flashing dark eyes, and the nervous motion of his hands, which were never still long together.

"How do you mean? Never forbidden it! Why, then, is all this coil which has set London aflame and lighted the fires of Paul's Yard for the destruction of those very books?"

"I did not say that men had never forbidden the reading of the Scriptures in the vulgar tongue by the unlettered. I said that Holy Church herself had never issued such a mandate."

"Not by her Popes?" questioned the younger man hastily.

"A papal bull is not the voice of the Holy Catholic Church," spoke Clarke, slowly and earnestly. "A Pope is not an apostle; though, as a bishop, and a Bishop of Rome, he must be listened to with all reverence. Apostles are not of man or by man, but sent direct by God. Popes elected by cardinals (and too often amid flagrant abuses) cannot truly be said to hold apostolic office direct from the Lord. No, I cannot see that point as others do. But let that pass. What I do maintain, and will hold to with certainty, is that in this land the Catholic Church has never forbidden men to read the Scriptures for themselves in any tongue that pleases them. I have searched statutes and records without end, and held disputations with many learned men, and never have I been proven to be in the wrong."

"I trow you are right there, John Clarke," spoke a deep voice from out the shadows of the room at the far end, away from the long, mullioned window. "I have ever maintained that our Mother the Holy Church is a far more merciful and gentle and tolerant mother than those who seek to uphold her authority, and who use her name as a cloak for much maliciousness and much ignorance."

Clarke turned swiftly upon the speaker, whose white head could be plainly distinguished in the shadows of the panelled room. The features, too, being finely cut, and of a clear, pallid tint, stood out against the dark leather of the chair in which the speaker sat. He was habited, although in his own house, in the academic gown to which his long residence in Oxford had accustomed him. But it was as a Doctor of the Faculty of Medicine that he had distinguished himself; and although of late years he had done little in practising amongst the sick, and spent his time mainly in the study of his beloved Greek authors, yet his skill as a physician was held in high repute, and there were many among the heads of colleges who, when illness threatened them, invariably besought the help of Dr. Langton in preference to that of any other leech in the place. Moreover, there were many poor scholars and students, as well as indigent townsfolk, who had good cause to bless his name; whilst the faces of his two beautiful daughters were well known in many a crowded lane and alley of the city, and they often went by the sobriquet of "The two saints of Oxford."

This was in part, perhaps, due to their names....