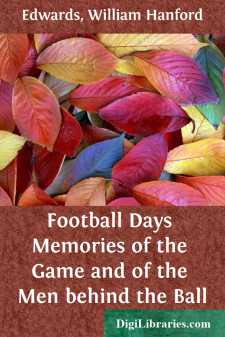 I value more highly than any other athletic gift I have ever received, the Princeton football championship banner that hangs on my wall. It was given to me by a friend who sent three boys to Princeton. It is a duplicate of the one that hangs in the trophy room of the gymnasium there.

How often have I gazed longingly at the names of my loyal team-mates inscribed upon it. Many times have I run over in my mind the part that each one played on the memorable occasion when that banner was won. Memories cluster about that token that are dear and sacred to me.

I see before me not only the faces of my team, but the faces of men of other years and other universities who have contributed so much to the great game of football. I recall the preparatory school days and the part that football played in our school and college careers. Again I see the athletic fields and the dressing rooms. I hear the earnest pleading of the coaches.

I see the teams run out upon the field and hear the cheering throng. The coin is tossed in the air. The shrill blast of the referee's whistle signals the game to start. The ball is kicked off, and the contest is on.

The thousands of spectators watch breathlessly. For the time the whole world is forgotten, except for the issue being fought out there before them.

But we are not dressed in football suits nowadays. We are on the side lines. We have a different part to play. Years have compelled a change. In spirit, however, we are still "in the game."

It is to share these memories with all true lovers of football and to pay a tribute to the heroes of the gridiron who are no longer with us that I have undertaken this volume. Let us together retrace the days in which we lived: days of preparation, days of victory, and days of defeat. Let us also look into the faces of some of the football heroes of years ago, and recall the achievements that made them famous. And let us recall, too, the men of the years just past who have so nobly upheld the traditions of the American game of football, and helped to place it on its present high plane.

MY CORNER"Fond memory sheds the light of other days around me." PROLOGUE

They say that no man ever made a successful football player who was lacking in any quality of imagination. If this be true, and time and again has it been proved, then there is no more fitting dedication to a book dealing with the gridiron heroes of the past than to a man like Johnny Poe. For football is the abandon of body and mind to the obsession of the spirit that knows no obstacle, counts no danger and for the time being is dull and callous to physical pain or exhaustion. It is a something that makes one see visions as Johnny saw them!

There is no sport in the world that brings out unselfishness as does this great gridiron game of ours. Every fall, second and scrub teams throughout the country sacrifice themselves only to let others enter the promised land of victory. It is a strange thing but one almost never hears any real football player criticise another's making the team, either his own or an All America. Although the player in this sport appreciates the loyal support of the thousands on the stands, every man realizes that his checks on the Bank of Cheers can never be cashed unless there is a deposit of hard work and practice. Perhaps all this in an indistinct and indefinite way explains why football players, the country over, understand each other and that when the game is attacked for any reason they stand shoulder to shoulder in defence of what they know down in the bottom of their hearts has such an influence on character building. And there is no one better fitted to tell the story of this and of the gridiron heroes than Big Bill Edwards, known not only as a player but far and wide as one of the best officials that ever handled the game. "A square deal and no roughing" was his motto, and every one realized it and accepted every decision unquestioningly. His association with players in so many angles has given him a particular insight into the sport and has enabled him to tell this story as no one else could.

And what names to conjure with! The whistle blows and a shadowy host springs into action before one's misty eyes—Alex Moffat, the star of kickers, Hector Cowan, Heffelfinger, Gordon Brown, Ma Newell, Truxton Hare, Glass, Neil Snow and Shevlin, giants of linemen. But I must stop before I trespass upon what Bill Edwards will do better. Here's to them all—forty years of heroes!