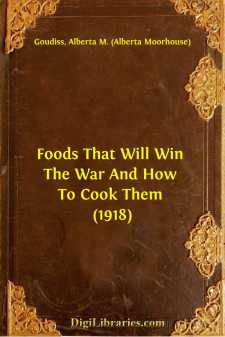 SAVE WHEAT Reasons Why Our Government Asks Us to Save Wheat, with Practical Recipes for the Use of Other Grains

A slice of bread seems an unimportant thing. Yet one good-sized slice of bread weighs an ounce. It contains almost three-fourths of an ounce of flour.

As it takes four and one-half bushels of wheat to make a barrel of ordinary flour, this waste would represent the flour from over 7,000,000 bushels of wheat. Fourteen and nine-tenths bushels of wheat on the average are raised per acre. It would take the product of some 470,000 acres just to provide a single slice of bread to be wasted daily in every home.

But some one says, "a full slice of bread is not wasted in every home." Very well, make it a daily slice for every four or every ten or every thirty homes—make it a weekly or monthly slice in every home—or make the wasted slice thinner. The waste of flour involved is still appalling. These are figures compiled by government experts, and they should give pause to every housekeeper who permits a slice of bread to be wasted in her home.

Another source of waste of which few of us take account is home-made bread. Sixty per cent. of the bread used in America is made in the home. When one stops to consider how much home-made bread is poorly made, and represents a large waste of flour, yeast and fuel, this housewifely energy is not so commendable. The bread flour used in the home is also in the main wheat flour, and all waste of wheat at the present time increases the shortage of this most necessary food.

Fuel, too, is a serious national problem, and all coal used in either range, gas, or electric oven for the baking of poor bread is an actual national loss. There must be no waste in poor baking or from poor care after the bread is made, or from the waste of a crust or crumb.

Waste in your kitchen means starvation in some other kitchen across the sea. Our Allies are asking for 450,000,000 bushels of wheat, and we are told that even then theirs will be a privation loaf. Crop shortage and unusual demand has left Canada and the United States, which are the largest sources of wheat, with but 300,000,000 bushels available for export. The deficit must be met by reducing consumption on this side the Atlantic. This can be done by eliminating waste and by making use of cereals and flours other than wheat in bread-making.

The wide use of wheat flour for bread-making has been due to custom. In Europe rye and oats form the staple breads of many countries, and in some sections of the South corn-bread is the staff of life. We have only to modify a little our bread-eating habits in order to meet the present need....