Followers of the Trail 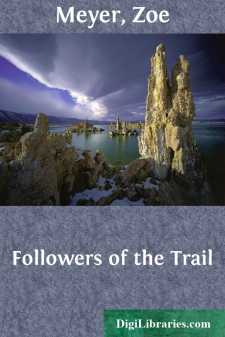 In the depths of the green wilderness, where dark spruce and hemlock guard the secrets of the trail, are still to be found wild creatures who know little of man and who regard him with more of curiosity than of fear. Woodland ponds, whose placid waters have never reflected the dark lines of a canoe, lie like jewels in their setting of green hills; ponds where soft-eyed deer come down to drink at twilight, and where the weird laughter of the loon floats through the morning mists. Toward the south, however, man is fast penetrating the secrets of the forest, blazing dim trails and leaving fear and destruction in the wake of his guns and traps.

Occasionally a hunter, unarmed save perhaps for a camera, enters the wilderness to study its inhabitants, not that he may destroy them, but that he may the better understand them, and through them draw closer to nature. Such a man was the Hermit, who dwelt alone in a log cabin where the southern border of the wilderness terminated abruptly at an old snake fence. Tall forest trees leaned toward the clearing and many a follower of dim forest trails approached the fence during the hours of darkness to peer curiously, though somewhat fearfully, at the lonely cabin.

Perhaps the visitor might be a black bear in search of the berries which were sure to be found at the edges of the cleared ground; perhaps a lynx, staring with pale, savage eyes upon the cabin, hating the man who occupied it, yet fearing his power. Again it might be an antlered deer who paused a moment, one dainty hoof uplifted, brown eyes, wholly curious, fixed upon the silent dwelling. Only the smaller woodfolk such as rabbits, squirrels, raccoons, porcupines, and now and then a fox, dared make a closer investigation of the clearing.

As for the man himself, he would, if possible, have made a friend of every wild creature who came near his dwelling. Broken in health, he had turned wearily from the rush and clamor of the city to the clear, balsam-scented air of the woods, where he was fast gaining a health and vigor that he had not believed possible. Out of a lean face, tanned by exposure and wrinkled with kindly humor, a pair of keen gray eyes looked with never-flagging interest upon the busy world about him.

The Hermit, in spite of his comparative isolation from those of his kind, was far from leading a life of uselessness. Having been from boyhood an enthusiastic student of botany, he had located in the big woods many a leaf, bark and root which, when sent back into the busy world, proved a blessing to ailing humanity.

He knew where to find the aromatic spice-bush to cool the burning of fever, and where in the spring grew the tenderest willow twigs whose bark went into cures for rheumatism. Sassafras yielded its savory roots for tea and tonics, and the purplish red pokeberry supplied a valuable blood purifier. So he harvested the woods for others, at the same time finding for himself health and contentment.

Twice yearly he took his harvest to the nearest shipping center, setting forth as the first streaks of dawn appeared in the east, and returning when the serrated wall of the wilderness was etched sharply against the sunset sky, and the songs of the robin and the hermit thrush gave voice to the twilight.

Since his arrival at the cabin the Hermit had been much alone, his only visitors being occasional hunters or trappers who passed his home by chance, or asked shelter when overtaken by the night....