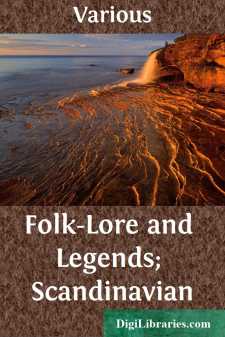 There was once a farmer who was master of one of the little black dwarfs that are the blacksmiths and armourers, and he got him in a very curious way. On the road leading to this farmer's ground there stood a stone cross, and every morning as he went to his work he used to stop and kneel down before this cross, and pray for some minutes.

On one of these occasions he noticed on the cross a pretty, bright insect, of such a brilliant hue that he could not recollect having ever before seen the like in an insect. He wondered greatly at this, but still he did not disturb it. The insect did not remain long quiet, but ran without ceasing backwards and forwards upon the cross, as if it was in pain and wanted to get away.

Next morning the farmer again saw the very same insect, and again it was running to and fro in the same state of uneasiness. The farmer began now to have some suspicions about it, and thought to himself—

"Would this now be one of the little black enchanters? It runs about just like one that has an evil conscience, as one that would, but cannot, get away."

A variety of thoughts and conjectures passed through his mind, and he remembered what he had often heard from his father and other old people, that when any of the underground people chance to touch anything holy they are held fast and cannot quit the spot, and so they are extremely careful to avoid all such things.

"But," thought he, "you may even be something else, and I should, perhaps, be committing a sin in taking the little insect away."

So he let it stay where it was.

When, however, he twice again found it in the same place, and still running about with the same signs of uneasiness, he said—

He made a grasp at the insect, which resisted and clung fast to the stone; but he held it tight, and tore it away by main force, and lo! then he found he had, by the top of the head, a little ugly black chap, about six inches long, screeching and kicking at a furious rate.

The farmer was greatly astounded at this sudden transformation. Still he held his prize fast, and kept calling to him, while he administered to him a few smart slaps—

"Be quiet, be quiet, my little man! If crying was to do the business, we might look for heroes in swaddling-clothes. We'll just take you with us a bit, and see what you are good for."

The little fellow trembled and shook in every limb, and then began to whimper most piteously, and begged of the farmer to let him go.

"No, my lad," replied the farmer, "I will not let you go till you tell me who you are, and how you came here, and what trade you know that enables you to earn your bread in the world."

At this the little man grinned and shook his head, but said not a word in reply, only begging and praying the more to get loose. The farmer thought he must now entreat him if he would coax any information out of him. But it was all to no purpose. He then adopted the contrary method, and whipped and slashed him, but just to as little effect....