Flowers from a Persian Garden and Other Papers 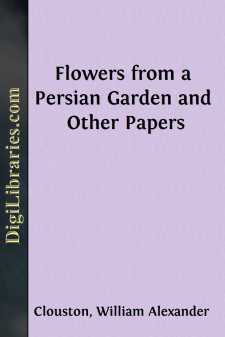 It is remarkable how very little the average general reader knows regarding the great Persian poet SaádГѓ­ and his writings. His name is perhaps more or less familiar to casual readers from its being appended to one or two of his aphorisms which are sometimes reproduced in odd corners of popular periodicals; but who he was, when he lived, and what he wrote, are questions which would probably puzzle not a few, even of those who consider themselves as “well read,” to answer without first recurring to some encyclopædia. Yet SaádГѓ­ was assuredly one of the most gifted men of genius the world has ever known: a man of large and comprehensive intellect; an original and profound thinker; an acute observer of men and manners; and his works remain the imperishable monument of his genius, learning, and industry.

Maslahu ’d-DГѓ­n Shaykh SaádГѓ­ was born, towards the close of the twelfth century, at ShГѓ­ráz, the famous capital of Fars, concerning which city the Persians have the saying that “if Muhammed had tasted the pleasures of ShГѓ­ráz, he would have begged Allah to make him immortal there.” In accordance with the usual practice in Persia, he assumed as his takhallus, or poetical name, SaádГѓ­, from his patron Atabag Saád bin ZingГѓ­, sovereign of Fars, who encouraged men of learning in his principality. SaádГѓ­ is said to have lived upwards of a hundred years, thirty of which were passed in the acquisition of knowledge, thirty more in travelling through different countries, and the rest of his life he spent in retirement and acts of devotion. He died, in his native city, about the year 1291.

At one period of his life SaádГѓ­ took part in the wars of the Saracens against the Crusaders in Palestine, and also in the wars for the faith in India. In the course of his wanderings he had the misfortune to be taken prisoner by the Franks, in Syria, and was ransomed by a friend, but only to fall into worse thraldom by marrying a shrewish wife. He has thus related the circumstances:

“Weary of the society of my friends at Damascus, I fled to the barren wastes of Jerusalem, and associated with brutes, until I was made captive by the Franks, and forced to dig clay along with Jews in the fortress of Tripoli. One of the nobles of Aleppo, mine ancient friend, happened to pass that way and recollected me. He said: ‘What a state is this to be in! How farest thou?’ I answered: ‘Seeing that I could place confidence in God alone, I retired to the mountains and wilds, to avoid the society of man; but judge what must be my situation, to be confined in a stall, in company with wretches who deserve not the name of men. “To be confined by the feet with friends is better than to walk in a garden with strangers.”’ He took compassion on my forlorn condition, ransomed me from the Franks for ten dГѓ­nars, and took me with him to Aleppo.

“My friend had a daughter, to whom he married me, and he presented me with a hundred dГѓ­nars as her dower. After some time my wife unveiled her disposition, which was ill-tempered, quarrelsome, obstinate, and abusive; so that the happiness of my life vanished. It has been well said: ‘A bad woman in the house of a virtuous man is hell even in this world.’ Take care how you connect yourself with a bad woman. Save us, O Lord, from the fiery trial! Once she reproached me, saying: ‘Art thou not the creature whom my father ransomed from captivity amongst the Franks for ten dГѓ­nars?’ ‘Yes,’ I answered; ‘he redeemed me for ten dГѓ­nars, and enslaved me to thee for a hundred.’

“I heard that a man once rescued a sheep from the mouth of a wolf, but at night drew his knife across its throat. The expiring sheep thus complained: ‘You delivered me from the jaws of a wolf, but in the end I perceive you have yourself become a wolf to me.’”

Sir Gore Ouseley, in his Biographical Notices of Persian Poets, states that SaádГѓ­ in the latter part of his life retired to a cell near ShГѓ­ráz, where he remained buried in contemplation of the Deity, except when visited, as was often the case, by princes, nobles, and learned men....