Flower of the North A Modern Romance 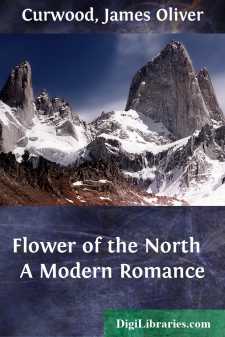 "Such hair! Such eyes! Such color! Laugh if you will, Whittemore, but I swear that she was the handsomest girl I've ever laid my eyes upon!"

There was an artist's enthusiasm in Gregson's girlishly sensitive face as he looked across the table at Whittemore and lighted a cigarette.

"She wouldn't so much as give me a look when I stared," he added. "I couldn't help it. Gad, I'm going to make a full-page 'cover' of her to-morrow for Burke's. Burke dotes on pretty women for the cover of his magazine. Why, demmit, man, what the deuce are you laughing at?"

"Not at this particular case, Tom," apologized Whittemore. "But—I'm wondering—"

His eyes wandered ruminatively about the rough interior of the little cabin, lighted by a single oil-lamp hanging from a cross-beam in the ceiling, and he whistled softly.

"I'm wondering," he went on, "if you'll ever strike a place where you won't see 'one of the most beautiful things on earth.' The last one was at Rio Piedras, wasn't it, Tom? A Spanish girl, or was she a Creole? I believe I've got your letter yet, and I'll read it to you to-morrow. I wasn't surprised. There are pretty women down in Porto Rico. But I didn't think you'd have the nerve to discover one up here—in the wilderness."

"She's got them all beat," retorted the artist, flecking the ash from the tip of his cigarette.

"Even the Valencia girl, eh?"

There was a chuckling note of pleasure in Philip Whittemore's voice as he leaned half across the table, his handsome face, bronzed by snow and wind, illumined in the lamp-glow. Gregson, in strong contrast, with his round, smooth cheeks, slim hands, and build that was almost womanish, leaned over his side to meet him. For the twentieth time that evening the two men shook hands.

"Haven't forgotten Valencia, eh?" chuckled the artist, gloatingly. "Lord, but I'm glad to see you again, Phil. Seems like a century since we were out raising the Old Ned together, and yet it's less than three years since we came back from South America. Valencia! Will we ever forget it? When Burke handed me his first turn-down a month ago and said, 'Tom, your work begins to show you want a rest,' I thought of Valencia, and was so confoundedly homesick for those old days when you and I pretty nearly started a revolution, and came within an ace of getting our scalps lifted, that I moped for a week. Gad, do I remember it? You got out by fighting, and I through a pretty girl."

"And your nerve," chuckled Whittemore, crushing the other's hand. "That was when I made up my mind you were the nerviest man alive, Greggy. Did you ever learn what became of Donna Isobel?"

"She appeared twice in Burke's, once as the 'Goddess of the Southern Republics' and again as 'The Girl of Valencia.' She married that reprobate of a Carabobo planter, and I believe they're happy."

"It seems to me there were others," continued Whittemore, pondering for a moment in mock seriousness. "There was one at Rio whom you swore would make your fortune if you could get her to sit for you, and whose husband was on the point of putting six inches of steel into you for telling her so, when I explained that you were young and harmless, and a little out of your head—"

"With your fist," cried Gregson, joyously....