Flower of the Dusk 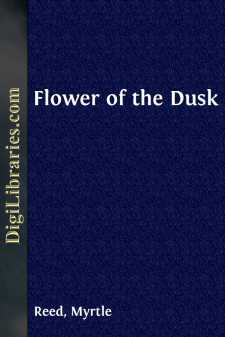 I A Maker of Songs Sunset

The pines, darkly purple, towered against the sunset. Behind the hills, the splendid tapestry glowed and flamed, sending far messages of light to the grey East, where lay the sea, crooning itself to sleep. Bare boughs dripped rain upon the sodden earth, where the dead leaves had so long been hidden by the snow. The thousand sounds and scents of Spring at last had waked the world.

The man who stood near the edge of the cliff, quite alone, and carefully feeling the ground before him with his cane, had chosen to face the valley and dream of the glory that, perchance, trailed down in living light from some vast loom of God's. His massive head was thrown back, as though he listened, with a secret sense, for music denied to those who see.

He took off his hat and stray gleams came through the deepening shadows to rest, like an aureole, upon his silvered hair. Remembered sunsets, from beyond the darkness of more than twenty years, came back to him with divine beauty and diviner joy. Mnemosyne, that guardian angel of the soul, brought from her treasure-house gifts of laughter and tears; the laughter sweet with singing, and the bitterness of the tears eternally lost in the Water of Forgetfulness.

Slowly, the light died. Dusk came upon the valley and crept softly to the hills. Mist drifted in from the sleeping sea, and the hush of night brooded over the river as it murmured through the plain. A single star uplifted its exquisite lamp against the afterglow, near the veiled ivory of the crescent moon.

Sighing, the man turned away. "Perhaps," he thought, whimsically, as he went cautiously down the path, searching out every step of the way, "there was no sunset at all."

The road was clear until he came to a fallen tree, over which he stepped easily. The new softness of the soil had, for him, its own deep meaning of resurrection. He felt it in the swelling buds of the branches that sometimes swayed before him, and found it in the scent of the cedar as he crushed a bit of it in his hand.

Easily, yet carefully, he went around the base of the hill to the street, where his house was the first upon the right-hand side. The gate creaked on its hinges and he went quickly up the walk, passing the grey tangle of last Summer's garden, where the marigolds had died and the larkspur fallen asleep.

Within the house, two women awaited him, one with anxious eagerness, the other with tenderly watchful love. The older one, who had long been listening, opened the door before he knocked, but it was Barbara who spoke to him first.

"Am I, Barbara? Tell me, was there a sunset to-night?"

Seeing with the Soul

"I thought so, and that accounts for my being late. I saw a beautiful sunset—I saw it with my soul."

"Give me your coat, Ambrose." The older woman stood at his side, longing to do him some small service.

"Thank you, Miriam; you are always kind."

The tiny living-room was filled with relics of past luxury....