Florence and Northern Tuscany with Genoa With Sixteen Illustrations In Colour By William Parkinson And Sixteen Other Illustrations, Second Edition 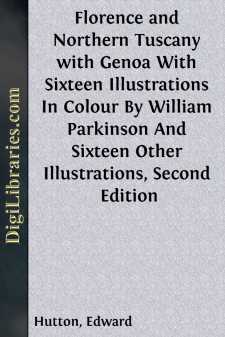 The traveller who on his way to Italy passes along the Riviera di Ponente, through Marseilles, Nice, and Mentone to Ventimiglia, or crossing the Alps touches Italian soil, though scarcely Italy indeed, at Turin, on coming to Genoa finds himself really at last in the South, the true South, of which Genoa la Superba is the gate, her narrow streets, the various life of her port, her picturesque colour and dirt, her immense palaces of precious marbles, her oranges and pomegranates and lemons, her armsful of children, and above all the sun, which lends an eternal gladness to all these characteristic or delightful things, telling him at once that the North is far behind, that even Cisalpine Gaul is crossed and done with, and that here at last by the waves of that old and great sea is the true Italy, that beloved and ancient land to which we owe almost everything that is precious and valuable in our lives, and in which still, if we be young, we may find all our dreams. What to us are the weary miles of Eastern France if we come by road, the dreadful tunnels full of despair and filth if we come by rail, now that we have at last returned to her, or best of all, perhaps, found her for the first time in the spring at twenty-one or so, like a fair woman forlorn upon the mountains, the Ariadne of our race who placed in our hand the golden thread that led us out of the cavern of the savage to the sunlight and to her. But though, indeed, I think all this may be clearer to those who come to her in their first youth by the long white roads with a song on their lips and a dream in their hearts—for the song is drowned by the iron wheels that doubtless have their own music, and the dream is apt to escape in the horror of the night imprisoned with your fellows; still, as we are so quick to assure ourselves, there are other ways of coming to Italy than on foot: in a motor-car, for instance, our own modern way, ah! so much better than the train, and truly almost as good as walking. For there is the start in the early morning, the sweet fresh air of the fields and the hills, the long halt at midday at the old inn, or best of all by the roadside, the afternoon full of serenity, that gradually passes into excitement and eager expectancy as you approach some unknown town; and every night you sleep in a new place, and every morning the joy of the wanderer is yours. You never "find yourself" in any city, having won to it through many adventures, nor ever are you too far away from the place you lay at on the night before. And so, as you pass on and on and on, till the road which at first had entranced you, wearies you, terrifies you, relentlessly opening before you in a monstrous white vista, and you who began by thinking little of distance find, as I have done, that only the roads are endless, even for you too the endless way must stop when it comes to the sea; and there you have won at last to Italy, at Genoa.

If you come by Ventimiglia, starting early, all the afternoon that white vision will rise before you like some heavenly city, very pure and full of light, beckoning you even from a long way off across innumerable and lovely bays, splendid upon the sea. While if you come from Turin, it is only at sunset you will see her, suddenly in a cleft of the mountains, the sun just gilding the Pharos before night comes over the sea, opening like some great flower full of coolness and fragrance.

It was by sea that John Evelyn came to Genoa after many adventures; and though we must be content to forego much of the surprise and romance of an advent such as that, yet for us too there remain many wonderful things which we may share with him. The waking at dawn, for instance, for the first time in the South, with the noise in our ears of the bells of the mules carrying merchandise to and from the ships in the Porto; the sudden delight that we had not felt or realised, weary as we were on the night before, at finding ourselves really at last in the way of such things, the shouting of the muleteers, the songs of the sailors getting their ships in gear for the seas, the blaze of sunlight, the pleasant heat, the sense of everlasting summer. These things, and so much more than these, abide for ever; the splendour of that ancient sea, the gesture of the everlasting mountains, the calmness, joy, and serenity of the soft sky....