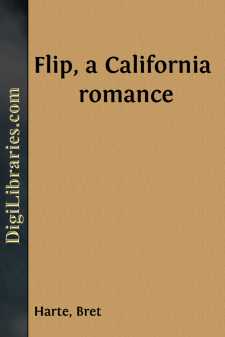 Just where the track of the Los Gatos road streams on and upward like the sinuous trail of a fiery rocket until it is extinguished in the blue shadows of the Coast Range, there is an embayed terrace near the summit, hedged by dwarf firs. At every bend of the heat-laden road the eye rested upon it wistfully; all along the flank of the mountain, which seemed to pant and quiver in the oven-like air, through rising dust, the slow creaking of dragging wheels, the monotonous cry of tired springs, and the muffled beat of plunging hoofs, it held out a promise of sheltered coolness and green silences beyond. Sunburned and anxious faces yearned toward it from the dizzy, swaying tops of stagecoaches, from lagging teams far below, from the blinding white canvas covers of "mountain schooners," and from scorching saddles that seemed to weigh down the scrambling, sweating animals beneath. But it would seem that the hope was vain, the promise illusive. When the terrace was reached it appeared not only to have caught and gathered all the heat of the valley below, but to have evolved a fire of its own from some hidden crater-like source unknown. Nevertheless, instead of prostrating and enervating man and beast, it was said to have induced the wildest exaltation. The heated air was filled and stifling with resinous exhalations. The delirious spices of balm, bay, spruce, juniper, yerba buena, wild syringa, and strange aromatic herbs as yet unclassified, distilled and evaporated in that mighty heat, and seemed to fire with a midsummer madness all who breathed their fumes. They stung, smarted, stimulated, intoxicated. It was said that the most jaded and foot-sore horses became furious and ungovernable under their influence; wearied teamsters and muleteers, who had exhausted their profanity in the ascent, drank fresh draughts of inspiration in this fiery air, extended their vocabulary, and created new and startling forms of objurgation. It is recorded that one bibulous stage-driver exhausted description and condensed its virtues in a single phrase: "Gin and ginger." This felicitous epithet, flung out in a generous comparison with his favorite drink, "rum and gum," clung to it ever after.

Such was the current comment on this vale of spices. Like most human criticism it was hasty and superficial. No one yet had been known to have penetrated deeply its mysterious recesses. It was still far below the summit and its wayside inn. It had escaped the intruding foot of hunter and prospector; and the inquisitive patrol of the county surveyor had only skirted its boundary. It remained for Mr. Lance Harriott to complete its exploration. His reasons for so doing were simple. He had made the journey thither underneath the stage-coach, and clinging to its axle. He had chosen this hazardous mode of conveyance at night, as the coach crept by his place of concealment in the wayside brush, to elude the sheriff of Monterey County and his posse, who were after him.

He had not made himself known to his fellow-passengers as they already knew him as a gambler, an outlaw, and a desperado; he deemed it unwise to present himself in a newer reputation of a man who had just slain a brother gambler in a quarrel, and for whom a reward was offered....