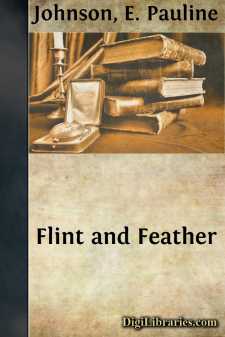 I cannot say how deeply it touched me to learn that Pauline Johnson expressed a wish on her death-bed that I, living here in the mother country all these miles away, should write something about her. I was not altogether surprised, however, for her letters to me had long ago shed a golden light upon her peculiar character. She had made herself believe, quite erroneously, that she was largely indebted to me for her success in the literary world. The letters I had from her glowed with this noble passion: the delusion about her indebtedness to me, in spite of all I could say, never left her. She continued to foster and cherish this delusion. Gratitude indeed was with her not a sentiment merely, as with most of us, but a veritable passion. And when we consider how rare a human trait true gratitude is—the one particular characteristic in which the lower animals put us to shame—it can easily be imagined how I was touched to find that this beautiful and grand Canadian girl remained down to the very last moment of her life the impersonation of that most precious of all virtues. I have seen much of my fellow men and women, and I never knew but two other people who displayed gratitude as a passion—indulged in it, I might say, as a luxury—and they were both poets. I can give no higher praise to the "irritable genus." On this account Pauline Johnson will always figure in my memory as one of the noblest minded of the human race.

Circumstances made my personal knowledge of her all too slight. Our spiritual intimacy, however, was very strong, and I hope I shall be pardoned for saying a few words as to how our friendship began. It was at the time of Vancouver's infancy, when the population of the beautiful town of her final adoption was less than a twelfth of what it now is, and less than a fiftieth part of what it is soon going to be.

In 1906 I met her during one of her tours. How well I remember it! She was visiting London in company with Mr. McRaye—making a tour of England—reciting Canadian poetry. And on this occasion Mr. McRaye added to the interest of the entertainment by rendering in a perfectly marvellous way Dr. Drummond's Habitant poems. It was in the Steinway Hall, and the audience was enthusiastic. When, after the performance, my wife and I went into the room behind the stage to congratulate her, I was quite affected by the warm and affectionate greeting that I got from her. With moist eyes she told her friends that she owed her literary success mainly to me.

And now what does the reader suppose that I had done to win all these signs of gratitude? I had simply alluded—briefly alluded—in the London "Athenaeum" some years before, to her genius and her work. Never surely was a reviewer so royally overpaid. Her allusion was to a certain article of mine on Canadian poetry which was written in 1889, and which she had read so assiduously that she might be said to know it by heart: she seemed to remember every word of it.

Now that I shall never see her face again it is with real emotion that I recur to this article and to the occasion of it....