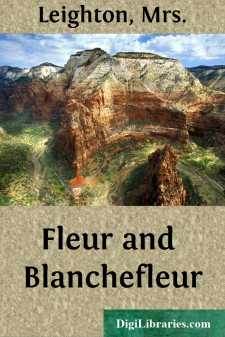 It is recorded by ancient chronicles that in the year of grace 624 a certain heathen King of Spain, Fenis by name, whose Queen was also a heathen, crossed over the sea with a mighty host into Christendom, and there, in the space of three days, made such havoc of the land, with destruction of towns, churches, and cloisters, that for full thirty miles from the shore where he had landed, not a human being or habitation was left to show where happy homes had been. Moreover, this King Fenis, while lading his ships with the booty thus ill-got, posted forty of his men in ambush over against the highway, there to lie in wait for any pilgrims who might pass by; and when presently a weary pilgrim band was seen toiling down the steep slope of a mountain nigh at hand, the forty thieves rushed out upon the pilgrims and threatened them with death, to escape which they readily parted with their goods; one only of the band showed fight, and he was a Count of France, conducting his daughter, a new-made widow, to the shrine of St. James at Compostella, where she had vowed to offer up prayer for her lord, lately slain in battle.

Bravely this Count fought, but all in vain, for, overborne by numbers, he was killed, and his daughter carried a captive to the heathen King Fenis, who, straightway taking ship, sailed back to Spain, and, when King Fenis was come home again, he divided the spoil among his soldiery, giving a portion to each man according to his rank; but the Christian lady he bestowed upon his Queen, who, long desirous of such an attendant, received her gladly into the royal apartments, suffering her to retain her Christian creed: in return for this kindness, the captive lady did good service, waiting faithfully both late and early on the Queen, and giving her instruction in the French tongue. Moreover, by her gentleness, wisdom, and discretion, this Christian captive won all hearts in the heathen court.

Now it happened that on Palm Sunday after these things the Queen gave birth to a lovely boy, whom the learned heathen masters, because he was born in the season of flowers, named Fleur; [more correctly 'Floire.'] and on that same Palm Sunday the Christian captive lady bore a daughter, whom with her own hands she baptized, giving her the name of Blanchefleur.

At the birth of his son, King Fenis rejoiced, and made great festivities; also he commanded that the infant should be nursed by a heathen, but brought up by the Christian captive, who, thus being charged with both children, tended them with such loving care that she scarce knew which was dearest to her, the King's son or her own daughter. So tended, the two children grew to be the sweetest and loveliest ever seen, and such was the love that they bore each one to the other that they could not endure to be parted.

When some time had passed and King Fenis marked that the intelligence of his son was now beginning to awake, he called the child to him and said: 'Fleur, now must you go diligently to school and learn of the wise Master Gaidon.' But for all answer to this command Fleur burst into tears, crying out: