Flash-lights from the Seven Seas 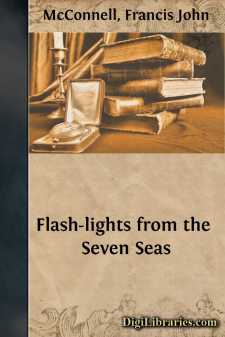 That vast stretch of opal islands; jade continents; sapphire seas of strange sunsets; mysterious masses of brown-skinned humanity; brown-eyed, full-breasted, full-lipped and full-hipped women; which we call the Orient, can only be caught by the photographer's art in flash-light pictures.

It is like a photograph taken in the night. It cannot be clear cut. It cannot have clean outlines. It can only be a blurred mass of humanity with burdens on their shoulders; humanity bent to the ground; creaking carts; weary-eyed children and women; moving, moving, moving; like phantom shadow-shapes; in and out; one great maze through the majestic ages; one confused history of the ancient past; emerging; but not yet out into the sunlight!

Such masses of humanity; such dim, uncertain origins of unfathered races; these can only be caught and seen as through a glass darkly.

Paul Hutchinson, my friend, in "The Atlantic Monthly" says of China what is true of the whole Orient:

"In this vast stretch of country, with its poor communications, we can only know in part. When one sets out to generalize he does so at his own peril. The only consolation is that it is almost impossible to disprove any statement; for, however fantastical, it is probably in accord with the facts in some part of the land."

The facts, fancies, and fallacies of this book are gleaned from the rovings and ramblings of a solid year of over fifty-five thousand miles of travel; through ten separate countries: Japan, Korea, China, the Philippine Islands, French Indo-China, the Malay States, Borneo, Java, Sumatra and the Hawaiian Islands; across seven seas: the Pacific Ocean, the Sea of Japan, the North China Sea, the Yellow Sea, the South China Sea, the Malacca Straits, and the Sea of Java; after visiting five wild and primitive tribes: the Ainu Indians of Japan, the Igorrotes of the Philippines, the Negritos of the same islands; the Dyaks of Borneo, and the Battaks of Sumatra; face to face by night and day with new races, new faces, new problems, new aspirations, new ways of doing things, new ways of living, new evils, new sins, new cruelties, new fears, new degradations; new hopes, new days, new ways, new nations arising; new gods, and a new God!

When one comes back from such a trip, having fortified himself with the reading of many books written about these far lands, in addition to his travel, one still has the profound conviction that, after all is said, done, and thought out, the only honest way to picture these vast stretches of land and humanity is to confess that all is in motion; like a great mass of bees in a hive, one on top of the other, busy at buzzing, buying, selling, living, dying, climbing, achieving; groping in the dark; moving upward by an unerring instinct toward the light.

At nights I cannot sleep for thinking about that weird, dim, misty panorama of fleeting, flashing pictures; those thousands of Javanese that I saw down in Sourabaya, who have never known what it means to have a home; who sleep in doorways by night, and along the river banks; where mothers give birth to children, who in turn live and die out under the open sky....