Fix Bay'nets The Regiment in the Hills 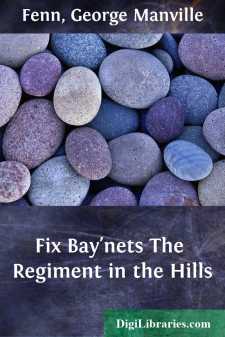 Chapter One. On the March.

Trrt—trrt—trrt. Just that little sound, as the sticks flirted with the drumheads to keep the men in step; for Her Majesty’s 404th Fusiliers were marching “easy.” So it was called; and it meant with the men smoking, and carrying their rifles as they pleased—shouldered, at the trail, slung muzzle up or muzzle down. But, all the same, it was a miserable fiction to call it marching easy, for it was impossible to make that march anything but hard. Why? Because of the road.

No; that is a fiction, too. It is absurd to call that stony shelf of rock, encumbered with stones of all sizes, full of cracks and holes, a road. It was almost in its natural state, with a smooth place here and there where it had been polished in bygone ages by avalanches of ice or stones.

But the sun shone brightly; the scenery was glorious, and grew in places awe-inspiring, as the regiment wound up and up the pass, and glimpses of snow-capped mountain and glowing valley were obtained.

To any one perched on high, as were a few scattered goats, the regiment, with its two mounted officers, its long train of mules, ambulance, and baggage-guard, and the native attendants, must have looked like a colony of marauding ants on their march, so wonderfully was everything dwarfed; even the grand deodar cedars growing far down the precipitous slopes below the track, which were stately trees, springing up to a hundred and a hundred and fifty feet, looking like groups of shrubs in the clear, pure air.

It was as much climbing as marching, and, as Bill Gedge said, “all agin the collar;” but the men did not seem to mind, as they mounted higher and higher in the expectation of finding that the next turn of the zigzag was the top of the pass.

“Here, I say,” cried the owner of the just-mentioned name, a thin, wiry-looking fellow, whom so far drill and six months in the North-west Territory of Her Majesty’s Indian dominions had not made muscular-looking; though, for the matter of that, he did not differ much from his companions, who in appearance were of the thorough East-end Cockney type—that rather degenerate class of lads who look fifteen or sixteen at most when twenty. Stamina seemed to be wanting, chests looked narrow, and their tunics covered gaunt and angular bodies, while their spiked white helmets, though they fitted their heads, had rather an extinguisher-like effect over the thin, hollow-cheeked, beardless faces.

Defects, all these, that would naturally die out; but at the time now under consideration any newspaper writer would have been justified in calling them a regiment of boys.

But, boy-like, it did not trouble them, for, apparently as fresh as when they had started hours before, they seemed to be revelling in the wonderful air of the mountain region, and to be as full of antics as a party of schoolfellows out for a day. Songs had been sung, each with a roaring chorus; tricks had been surreptitiously played on the “pass it on” principle—a lad in the rear tilting the helmet of the file in front over his eyes, or giving him a sounding spank on the shoulder with the above admonition, when it was taken with a grin and passed on right away to the foremost rank; while the commissioned officers seemed to be peculiarly blind and deaf so long as their lads marched well, and there was no falling-out of done-up fellows waiting for the ambulance to overtake them for the rest of the march....