by Robert B. Booth 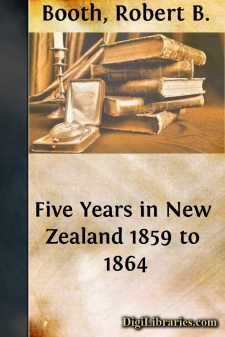 How I Came to Emigrate.

I was one of a family of nine, of which four were sons. My eldest brother was destined for the Church; the second had entered a mercantile house in Liverpool; and I, who was third on the list, it was my father's intention, should be educated for the Royal Engineers, and at the time my story opens I was prosecuting my studies for admission to the Academy at Woolwich, and had attained the age of sixteen, when my health failed, and I was sent home for rest and change. I did not again resume my studies, because it was soon after decided that I should emigrate to New Zealand.

The decision was principally, if not entirely, due to my own wishes. I had long entertained a strong bent to seeing the world for myself, and the idea was congenial to my boyish and quixotic notions of being the arbiter of my own fortunes. I recollect I was much given to reading tales of wild life in America and elsewhere; they contained a peculiar attraction for me, and influenced my mind in no small degree detrimental to continuing my studies for the Army or any specified profession at home.

When I first proposed what was in my mind it created somewhat of a sensation in the old home, and my father would not hear of any such madness as to throw up my studies after having advanced so far, and go away to the antipodes on a mere wild-goose chase, etc. On consulting his friends, however, many advised him to let me have my will; others (more wisely perhaps) expressed their opinions that I should be forced to resume my work, and that the ill-health was imagination, or foxing! (I have often since been inclined to agree with the latter supposition.)

The final decision, however, was that I should emigrate to Canterbury, New Zealand, in the following April. This colony was at that time about fourteen years' old, and was highly thought of as a field for youthful enterprise, and it was then the fashion to consider such tendencies as I expressed to be an omen of future success which should not be baulked.

A young friend, C——, son of a neighbouring squire, offered to accompany me as my chum and partner. He was six years my senior, and had had considerable experience in farming, so was considered very suitable for a colonial life; whereas I knew literally nothing of farming or anything else beyond my school work.

Our preparations were put in hand, and our passages booked by the good ship "Mary Anne," to sail from St. Katherine's Docks, London, on April 29th, 1859.

When all was finally settled my elation was supreme. The feeling that school grind was past and gone, that the world was open to me, and that I was free to do and act as I would was exhilarating. I felt that I had already attained to manhood, and that the world was at my feet, and a glorious life before me; well, I suppose most boys prematurely let loose would think the same, and I don't know that it is any harm to start under the circumstances with a hopeful and happy heart.

The day of parting at length arrived. It was a bright and lovely morning, about the middle of April, when I said goodbye to all my playmates at the old home, took a last look at the guns and fishing-rods, visited the various animals in the stables, gave a loving embrace to the great Newfoundland Juno, whom I could not hope to see again, submitted to be blessed and kissed by the servants and labourers, who had assembled to see me off, and took my seat on the car with my father, mother, and eldest brother, for the railway station, where C—— was to meet us.

C—— and I went direct to Liverpool from Drogheda, to which place my eldest brother accompanied us. My father and mother, having business en route, were to meet us there on the following day.

We had a rough passage to Liverpool, and the steamer was laden with cattle and pigs, the stench from which, combined with sea-sickness, was, I recollect, a terrible experience, and it was in no enviable condition of mind or body we arrived at the Liverpool Docks on a foggy, wet and dismal morning. My mercantile brother, Tom, came on board, and had all our belongings speedily conveyed to the lodgings we were to occupy during our stay. On the following day my father and mother arrived, and we spent a few days pleasantly seeing the lions of the great city and visiting friends. On arrival at London we found that we had a week or more before the ship sailed. Neither my father nor mother had been in London before; all was as new to them as to us, and we made the best of the time at our disposal.

On the evening of the day before the ship sailed, after seeing our luggage on board, and cabins made ready for occupation, we accompanied my father, mother, and brother to Euston Station, where they were to bid us God-speed. I was in good spirits till then, but when on the railway platform, a few minutes before the train started, my dear mother fairly broke down, and the tears were stealing down my father's cheeks. The less said about such partings the better; it was soon over, and the train started....