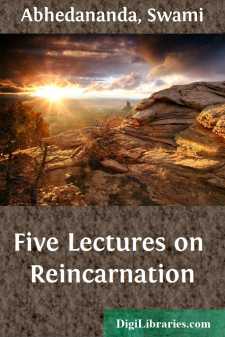 Add to My Favorites
Published: 9 years ago
Downloads: 119
Rating: (0 Votes)

The visible phenomena of the universe are bound by the universal law of cause and effect. The effect is visible or perceptible, while the cause is invisible or imperceptible. The falling of an apple from a tree is the effect of a certain invisible force called gravitation. Although the force cannot be perceived by the senses, its expression is visible. All perceptible phenomena are but the various expressions of different forces which act as invisible agents upon the subtle and imperceptible forms of matter. These invisible agents or forces together with the imperceptible particles of matter make up the subtle states of the phenomenal universe. When a subtle force becomes objectified, it appears as a gross object. Therefore, we can say, that every gross form is an expression of some subtle force acting upon the subtle particles of matter. The minute particles of hydrogen and oxygen when combined by chemical force, appear in the gross form of water. Water can never be separated from hydrogen and oxygen, which are its subtle component parts. Its existence depends upon that of its component parts, or in other words, upon its subtle form. If the subtle state changes, the gross manifestation will also change. The peculiarity in the gross form of a plant depends upon the peculiar nature of its subtle form, the seed. The peculiar nature of the gross forms in the animal kingdom depends upon the subtle forms which manifest variously in each of the intermediate stages between the microscopic unit of living matter and the highest man. The gross human body is closely related to its subtle body. Not only this, but every movement or change in the physical form is caused by the activity and change of the subtle body. If the subtle body be affected or changed a little, the gross body will also be affected similarly. The material body being the expression of the subtle body, its birth, growth, decay and death depend upon the changes of the subtle body. As long as the subtle body remains, it will continue to express itself in a corresponding gross form.

Now let us understand clearly what we mean by a subtle body. It is nothing but a minute germ of a living substance. It contains the invisible particles of matter which are held together by vital force, and it also possesses mind or thought-force in a potential state, just as the seed of a plant contains in it the life force and the power of growth. According to Vedanta, the subtle body consists of Antahkaranam, that is, the internal organ or the mind substance with its various modifications, mind, intellect, egoism, memory, the five instruments of perception: the powers of seeing, hearing, smelling, tasting and touching; the five instruments of action, such as the powers of seizing, moving, speaking, evacuating, and generating, and the five Prânas. Prâna is a Sanskrit word which means vital energy or the life-sustaining power in us. Although Prâna is one, it takes five different names on account of the five different functions it performs....