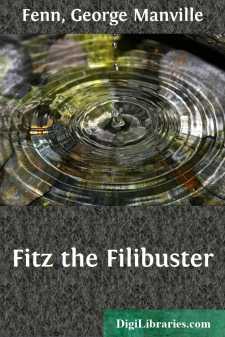 “Now, my good boy, have I not told you always to speak out in a sharp, business-like way? How in the world do you expect to get on in your profession and become a smart officer, one who can give orders promptly to his men, if you begin in that stammering, hesitating style? Here, I’m busy; what do you want?”

“Yes, sir; Mr Storks is going off to-night with an armed boat’s crew—”

“Thank you, Mr Burnett, I am much obliged; but allow me to tell you that your news is very stale, for I was perfectly aware of that fact, and gave the orders to Mr Storks myself.”

“Then you know now: very badly. No; the boat’s going on important business, and I don’t want her packed full of useless boys. What good do you expect you could do there?”

“Oh! Ah! H’m! Well—that’s smart. Yes, I like that, Mr Burnett, much better. Well, I don’t know what to say. There’s no danger. Perhaps you will be away all the night and get no sleep.”

“Doesn’t matter whether Mr Storks minds or not. Well—yes; you may go. There, there, no thanks; and—er—and—er—don’t take any notice, Mr Burnett; I am a little irritable this evening—maddening toothache, and that sort of thing. Don’t get into mischief. That’ll do.”

Commander Glossop, R.N., generally known as Captain of H.M. Gunboat Tonans, on special duty from the Channel Squadron, went below to his cabin, and Fitzgerald Burnett—Fitz for short—midshipman, seemed suddenly to have grown an inch taller, and comparatively stouter, as he seemed to swell out with satisfaction, while his keen grey eyes literally sparkled as he looked all a boy.

“Thought he was going to snap my head off,” he mattered, as he began to walk up and down, noticing sundry little preparations that were in progress in connection with one of the quarter-boats, in which, as she swung from the davits, a couple of the smart, barefooted sailors, whose toes looked very pink in the chill air, were overhauling and re-arranging oars, and the little mast, yard and sail, none of which needed touching, for everything was already in naval apple-pie order.

Fitz Burnett ended his walk by stopping and looking on.

“Going along with us, sir?” said one of the sailors.

“Yes,” said the lad shortly, and sharply enough to have satisfied his superior if he had overheard.

“That’s right, sir,” said the man, so earnestly that the boy looked pleased.

“Know where we are going, sir?” the other man ventured to ask.

“Is it likely?” was the reply; “and if I did know do you suppose that I would tell you?”